Benjamin Rush of Pennsylvania – Signatory to the Declaration of Independence 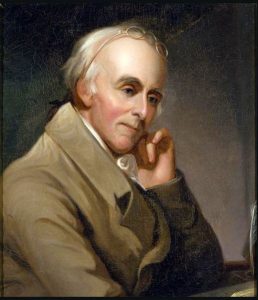 The Royal Botanic Garden Edinburgh has had its hand in shaping the careers and fortunes of many in our long history.  We’ve trained countless horticulturalists, botanists, taxonomists and medical doctors. One of those doctors went on to become a signatory of the Declaration of Independence – Benjamin Rush of Pennsylvania.

Also present was Francis Garden, from Aberdeenshire, whose half-brother was Alexander Garden of Charleston, South Carolina, after whom the Gardenia is named. Of course while some supported the revolution (like Rush) – Garden was a loyalist, who ultimately had to return to Britain.

In 2016 as part of the Drayton Hall Distinguished Speakers series, Henry Noltie from the Botanics gave this presentation as an overview to what Rush and the other American students would have been taught by Hope during their time in Edinburgh.