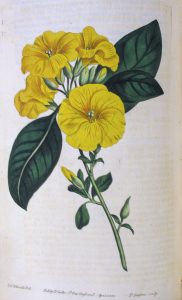 A member of the flax family which is unusual in having individuals with three different flower forms (a condition known as ‘tristyly’). These differ in relative lengths of stamens and pistils, and only different forms are fertile with each other. This small shrub is cultivated as an ornamental, but is native to mainland South and South-East Asia where it occurs on hills up to 2300 metres. It is used medicinally to treat paralysis and its crushed leaves are said to be applied to maggot-infested wounds. Caspar Georg Carl Reinwardt (1773–1854) was a Dutch botanist who worked mainly with the plants of Indonesia.