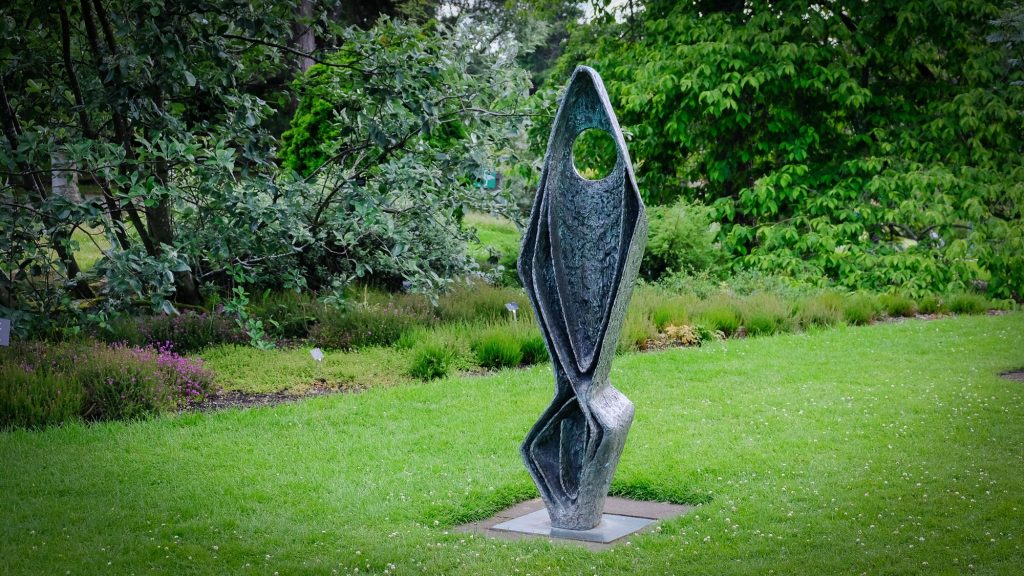 This is one of Hepworth’s earliest large-scale bronzes, featuring two diamond shapes, the larger sitting on top of the smaller, suggesting growth and upward movement. It has been interpreted as the shape of hands in prayer, a reading reinforced by her renewed spirituality during this period of her life, following the death of her son Paul in 1953. The cemetery where Hepworth is buried in St Ives, Cornwall, has another cast of Ascending Form (Gloria) at its entrance.

This sculpture and Rock Form (Porthcurno), also by Barbara Hepworth, have recently been acquired for the nation by the National Galleries of Scotland as part of the Government’s Acceptance in Lieu (AIL) scheme. They are on loan to the Royal Botanic Gardens Edinburgh (RBGE) through a reciprocal arrangement with the National Galleries. The bronzes have been on display at the Botanics for almost 40 years. They were originally placed on loan to the Scottish National Gallery of Modern Art (SNGMA)  in 1976, when it was sited at Inverleith House, in the centre of the Gardens. The loan was originally made by Hepworth’s estate following her death in 1975. They were officially on loan to the Ministry of Agriculture and Fisheries for Scotland, the body in charge of the Botanic Gardens at the time, and SNGMA were informally associated with their care.  When the SNGMA relocated to larger premises, the sculptures remained in the grounds of RBGE, and the loan passed to the Trustees of the Botanic Garden 1986, when the garden became independent of the Ministry of Agriculture and Fisheries.

Accepted by H.M. Governent in lieu of Inheritance Tax and allocated to the Scottish National Gallery of Modern Art 2013.