One of the largest Glyptostrobus trees

The Redwoods are a fascinating group of conifers that include the largest and tallest trees on earth as well as some of the oldest. The group, now classified as part of the family Cupressaceae, contains just nine genera and thirteen species.  Their fossil record extends back as much as 150 million years – during that time some have changed so little that they are barley distinguishable from the early fossils. In the course of their history they have dominated forests and swamps, especially across the northern hemisphere. Over time, changes in climate and plate tectonics, coupled with competition from other conifers and angiosperms, led to their restriction to a few areas in Tasmania, North America and eastern Asia, especially China.

One of the lesser known Redwoods is Glyptostrobus pensilis, often called the Chinese swamp cypress in English or Shuisong in Chinese. It’s most similar to Taxodium, the swamp cypress from southeastern USA and some parts of Mexico. The earliest Glyptostrobus fossil dates back just over 100 million years and like other Redwoods, it had a wide distribution across most of the northern hemisphere, as far north as the Arctic Circle and as far south as the Tropic of Cancer. It was one of the most common Redwoods and dominated vast swampy areas such as those in the central European depression during the late Tertiary: these swamp forests eventually formed the large coal deposits that are heavily exploited today. By the start of the Pliocene and the most recent Ice Age, Glyptostrobus‘ distribution had shrunk to small areas of eastern Asia and central Europe. Repeated glacial cycles led to its disappearance from the fossil record in Europe some 800,000 years ago and from Japan about 500,000 years ago.

In more modern times (over the last 10,000 years) semi-fossilised Glyptostrobus logs have been recovered from low lying river delta areas of SE China. From ancient Chinese manuscripts it appears that it was quite common in Guangdong and other coastal areas. Unfortunately it tended to occur in areas that were highly suitable for rice cultivation and, as this developed and as populations grew, its distribution and habitat became more and more restricted until wild populations disappeared. Despite this it remained widely cultivated along paddy margins, in temples and around villages. The timber was highly valued and and the tree was regarded as a symbol of good luck. It also had a significance within the traditional fengshui system, possibly because it occurred where the water meets the earth and so represented a harmonising presence. In 1974, during the Vietnam War, French botanists recorded its presence in a remote part of the central Vietnamese province of Dac Lac, over 1,000 kilometers from the nearest Chinese stands. In the following decades, their significance was overlooked and the area where they were located became the focus for resettlement and agricultural expansion. By the time that I visited this area in 2002, less than 250 trees remained scattered in two small nature reserves, isolated in a mosaic of pepper and coffee fields. The watercourses that fed the swamps had been dammed, permanently inundating and killing many trees. Invasive plants such as Imperata grass dominated drier areas and fires were a regular occurrence. Trees had stopped producing viable seed and there was no regeneration. More recently, in 2009, a radio show host declared that ‘extracts’ of Glyptostrobus could cure cancer – this led to a sudden upsurge in illegal logging of live trees and the removal of as much dead wood as possible. The claim had no basis in truth whatsoever but nevertheless, more than 70 of the remaining trees were lost. Various restoration initiatives have been launched but so far with little success. The future of these stands is very bleak.

In 2006, a survey team led by wetland ecologists from San Francisco University (SFU), were working on the Nakai Plateau in Khammouan, Lao PDR when one of them stumbled upon a natural, undisturbed stand of 40-50 large trees that resembled Taxodium. Photos and specimens were sent to staff at the International Conifer Conservation Programme (ICCP) and their identity as Glyptostrobus was confirmed.

The Nakai plateau, covering an area of about 500 square kilometers, lies at an altitude around 500 m above sea level on the eastern side of the Annamite mountains that divide Vietnam and Lao and some 625 kilometers northwest of Dac Lac in Vietnam. Its western side side is bounded by an escarpment that drops almost vertically down to the Mekong valley and the plateau itself is dissected by numerous rivers and streams with large areas seasonally flooded. The topography makes it an almost ideal place for a hydroscheme. In 1996 such a scheme was proposed and eventually built. In 2008 the reservoir was filled and the main Glyptostrobus stand inundated. Reservoir on the Nakai Plateau

Between 2006 and 2008, several smaller additional stands were located outside of the reservoir but these were either already on the margins of villages and heavily degraded or in areas designated for agricultural development as part of the environmental and social mitigation schemes implemented during the dam development. Seed was collected from the original stand but germination was poor (less than 1%) – four trees were planted at the headquarters of the Watershed Management Protection Authority (WMPA) and are now (2015) about 4 m tall. Remnant stand near a village outside of the reservoir area

In 2013 rumors of additional stands outside the reservoir area but within the main watershed started to circulate. A funding proposal was submitted to the National Geographic Society to support researchers from SFU, the ICCP and the Lao National University to visit the area and verify those rumors. The application was successful and the expedition was undertaken in January 2015. Results were astonishing. After several hours of traveling up rivers and hiking across mountains we found two almost undisturbed stands with more than 200 gigantic trees in each stand. 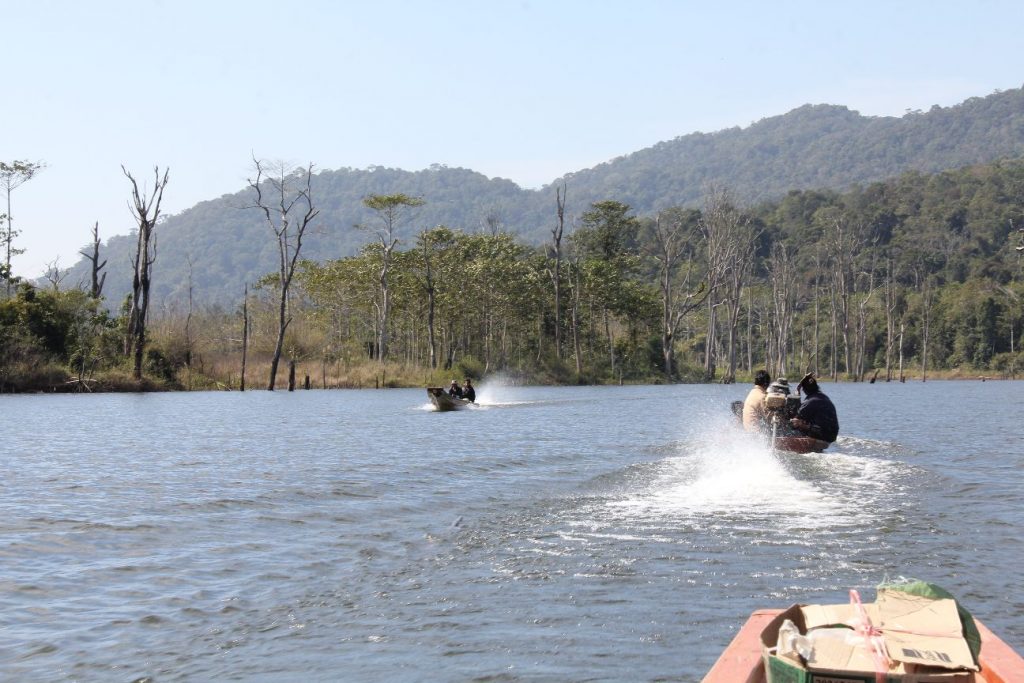 Travelling up one of the Nam Theun’s tributaries 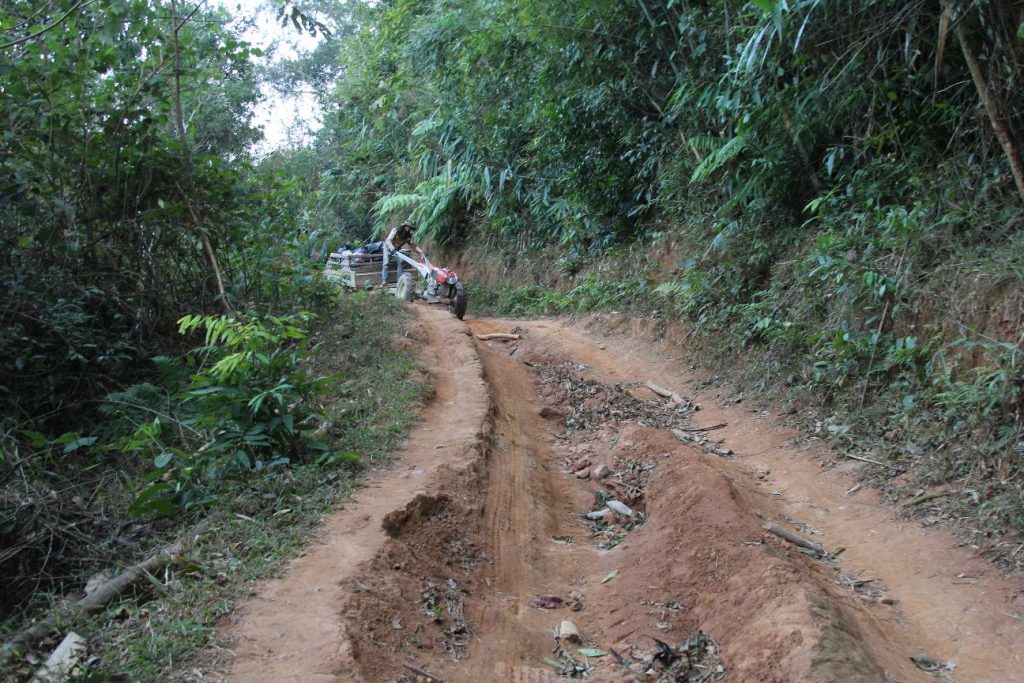 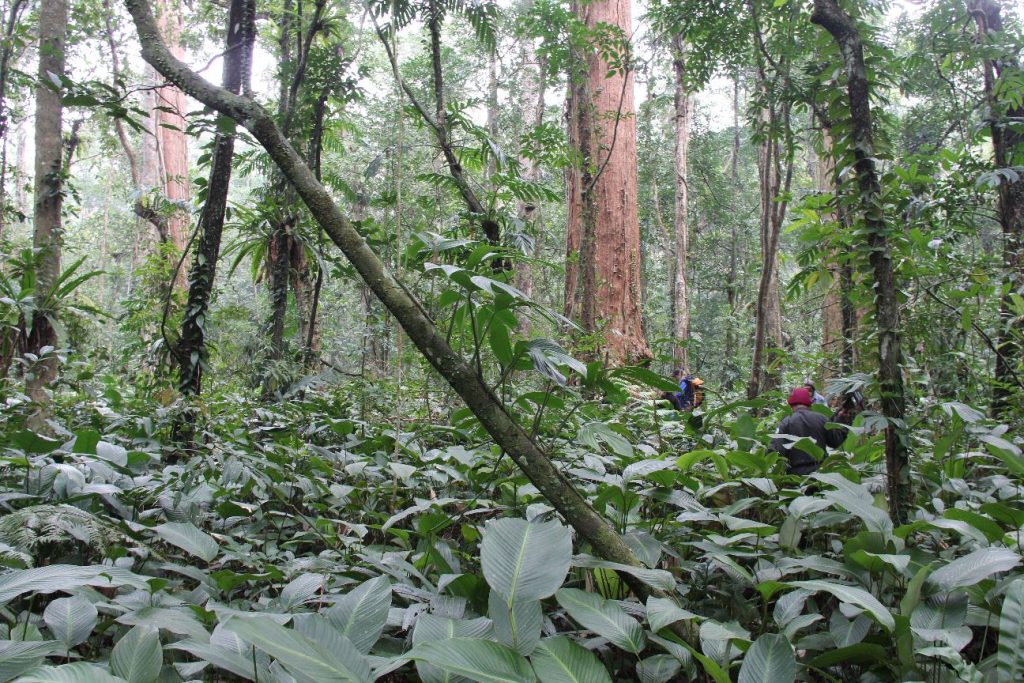 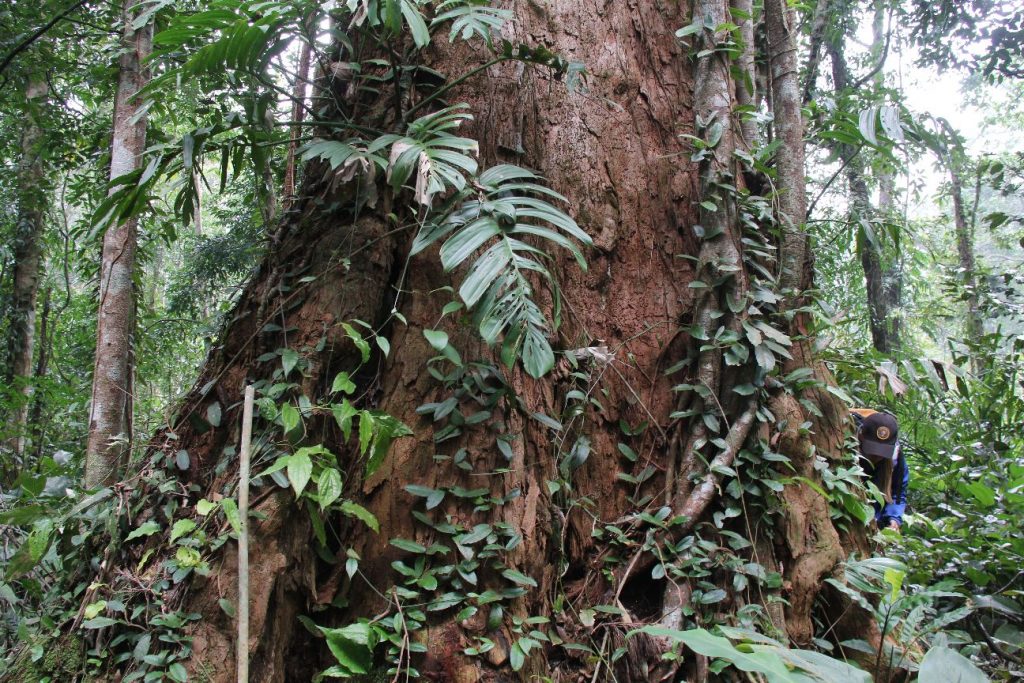 Many large trees have flared buttresses 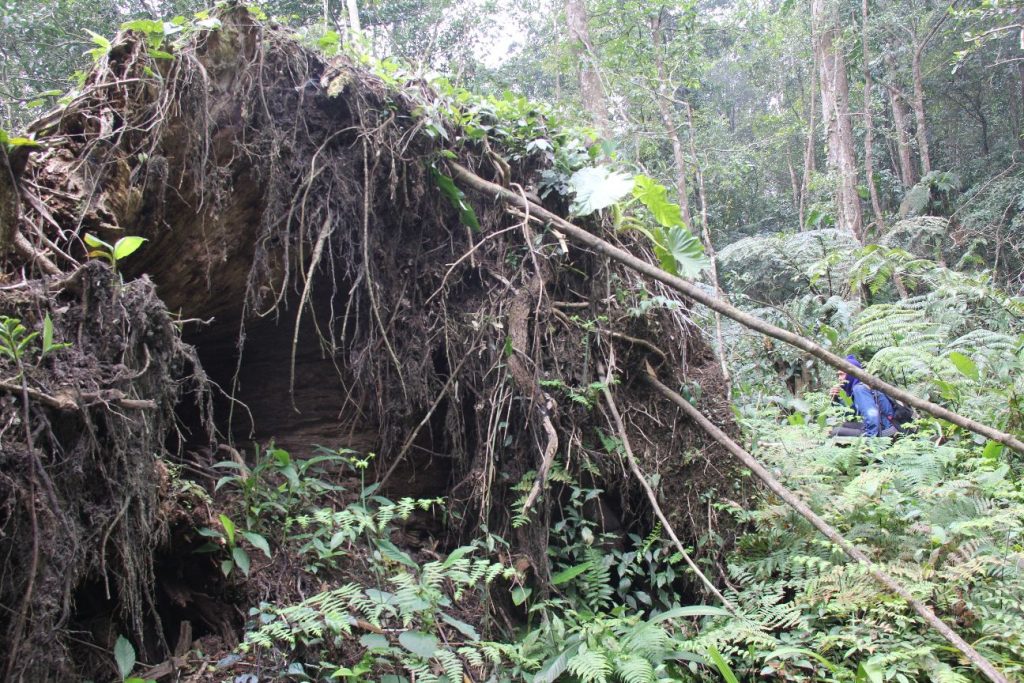 Old trees eventually fall, partly due to the weight of encircling lianas and strangling figs 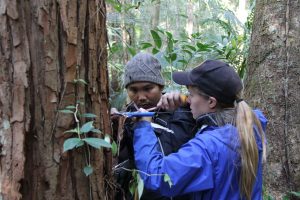 Coring trees to establish their age and examine growth patterns 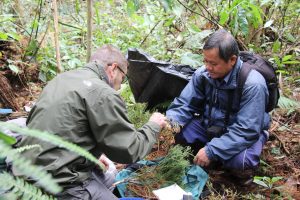 In twenty years of working in Cambodia, Lao and Vietnam I’ve never seen anything like it. Many trees were over 35 m tall, with diameters more than 2 m – walking amongst them was like being in a cathedral. Epiphytes and mosses draped the upper branches, strangling figs and other lianas twined sinuously around the trunks while giant gingers and other plants clothed the ground. Despite their remoteness, and despite the fact that the stands are within a protected area, they face an uncertain future – local people value the timber for house construction and illegal logging by people supplying the luxury timber trade in Vietnam and China is a very real threat and a comprehensive conservation plan is sorely needed. As part of that process we are planning further expeditions and surveys in the near future.