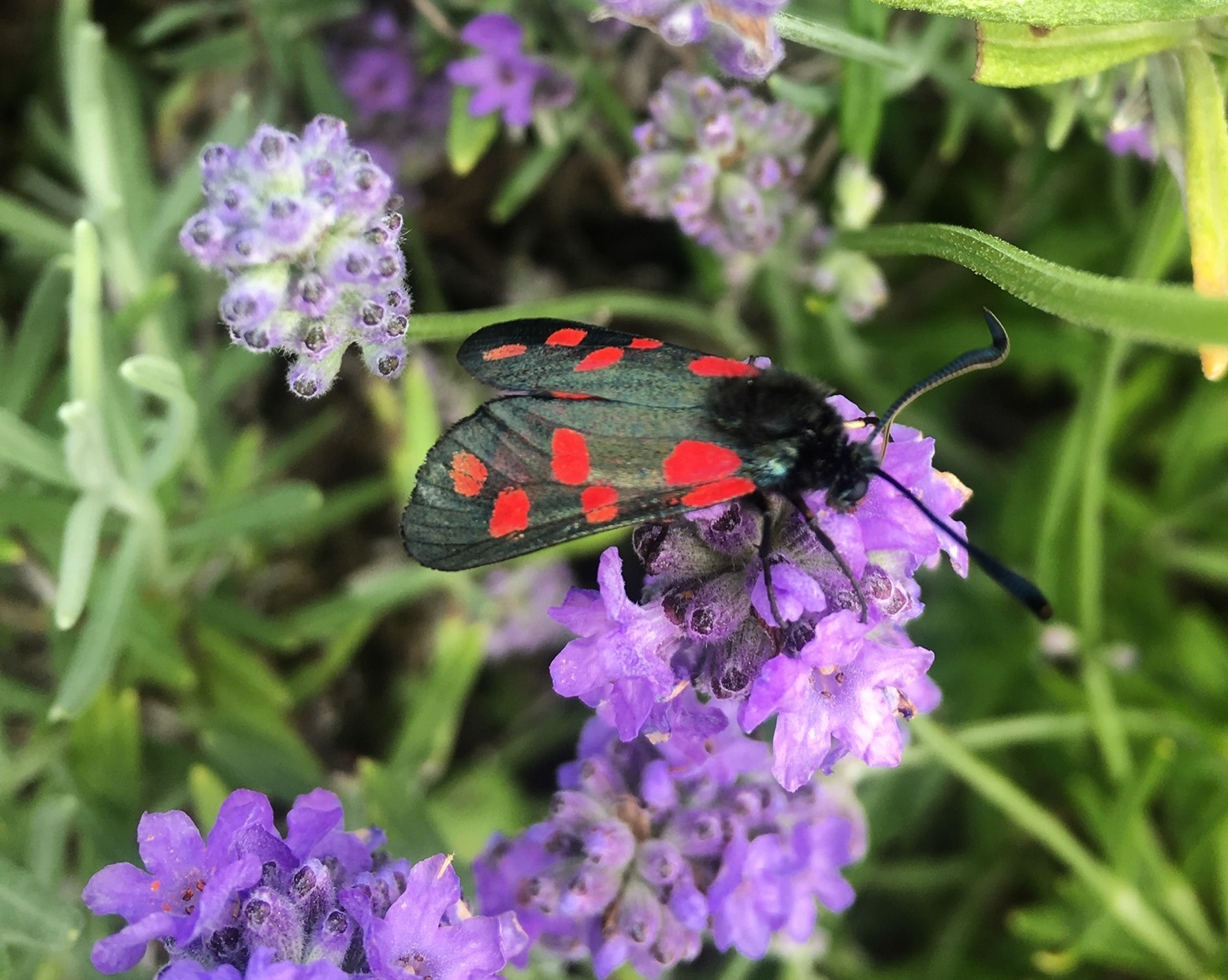 July 2017 was another wet month, with >74 mm of rain, more than half of which fell in the final week. However, it was also a sunny month, with 181.5 hours of sunshine recorded. The first half of the month was drier and the temperature reached almost 25°C on 18th.  Another ten species were added to the Garden’s wildlife list, bringing the total from 893 on 30 June to 903 on 31 July. They comprised two moths, three bugs, three beetles, a spider and a gall-mite.

Birds Thirty-six bird species were recorded at RBGE Edinburgh in July, one fewer than in June. The species mix was almost identical to June’s, although Cormorant and Siskin were not recorded while Black-headed Gulls began to return from their breeding grounds (from 11th). The month was notable for a high frequency of records of Grey Heron (22 days out of a possible maximum of 29 recording days), while Swift and Swallow were seen on 13 and 12 dates respectively, both considerably higher than in the whole of 2016. A possible Nuthatch call heard by a visitor in the Chinese Hillside on 12th was discounted because a Song Thrush was heard singing using Nuthatch-like calls in its song in the same part of the Garden on the same day. The complete list of 36 species recorded during July 2017 was: Blackbird, Blackcap, Black-headed Gull, Blue Tit, Bullfinch, Carrion Crow, Chaffinch, Chiffchaff, Coal Tit, Dunnock, Feral Pigeon, Goldcrest, Goldfinch, Great Spotted Woodpecker, Great Tit, Greenfinch, Grey Heron, Herring Gull, Jackdaw, Kingfisher, Lesser Black-backed Gull, Long-tailed Tit, Magpie, Mallard, Moorhen, Oystercatcher, Robin, Song Thrush, Stock Dove, Swallow, Sparrowhawk, Swift, Tawny Owl, Tree Creeper, Wood Pigeon, Wren. 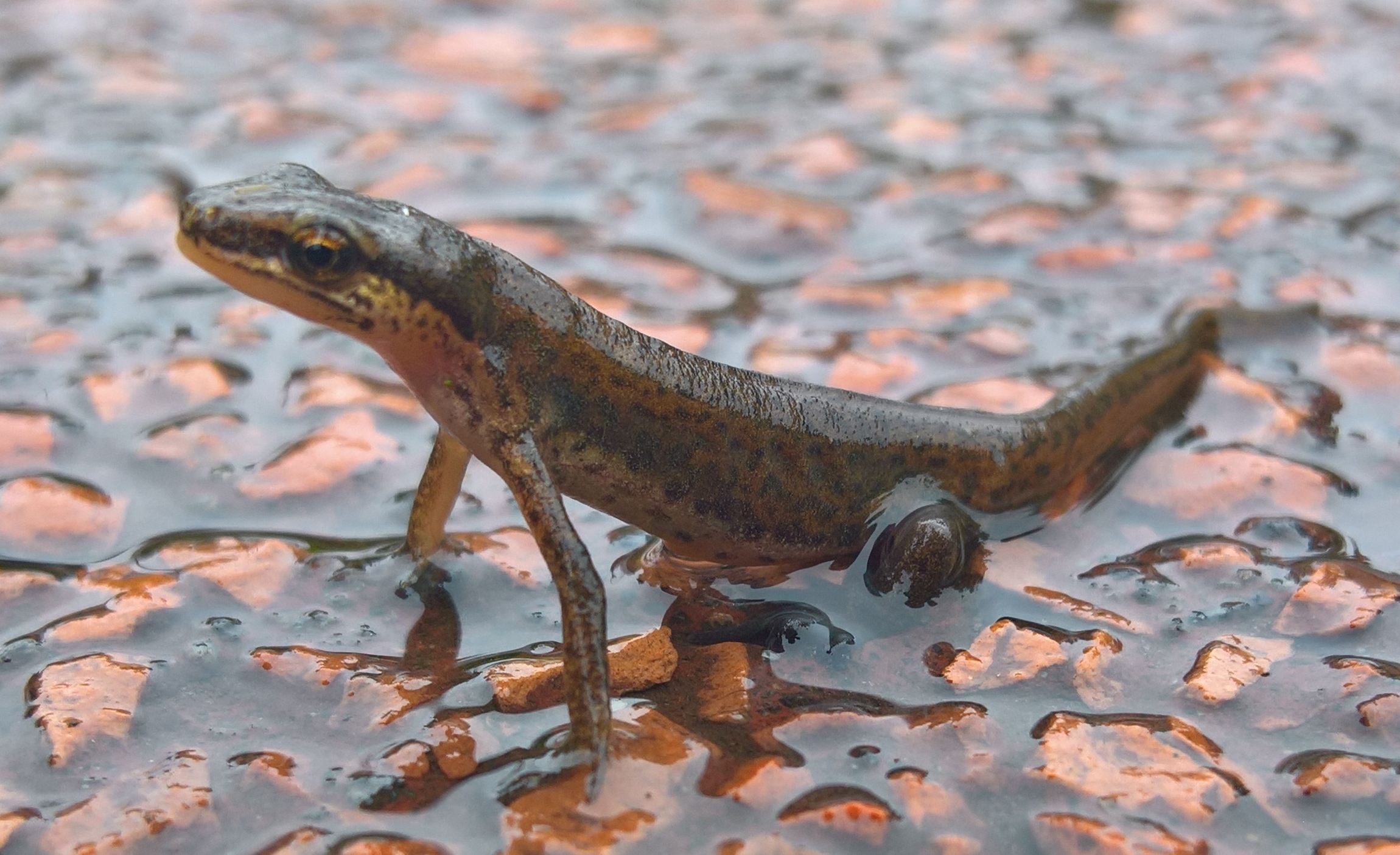 Mammals and amphibians: Foxes were seen on seven occasions and there was another record of House Mouse on 29th. Palmate Newt was recorded on 22nd and Common Frogs on eight different dates. 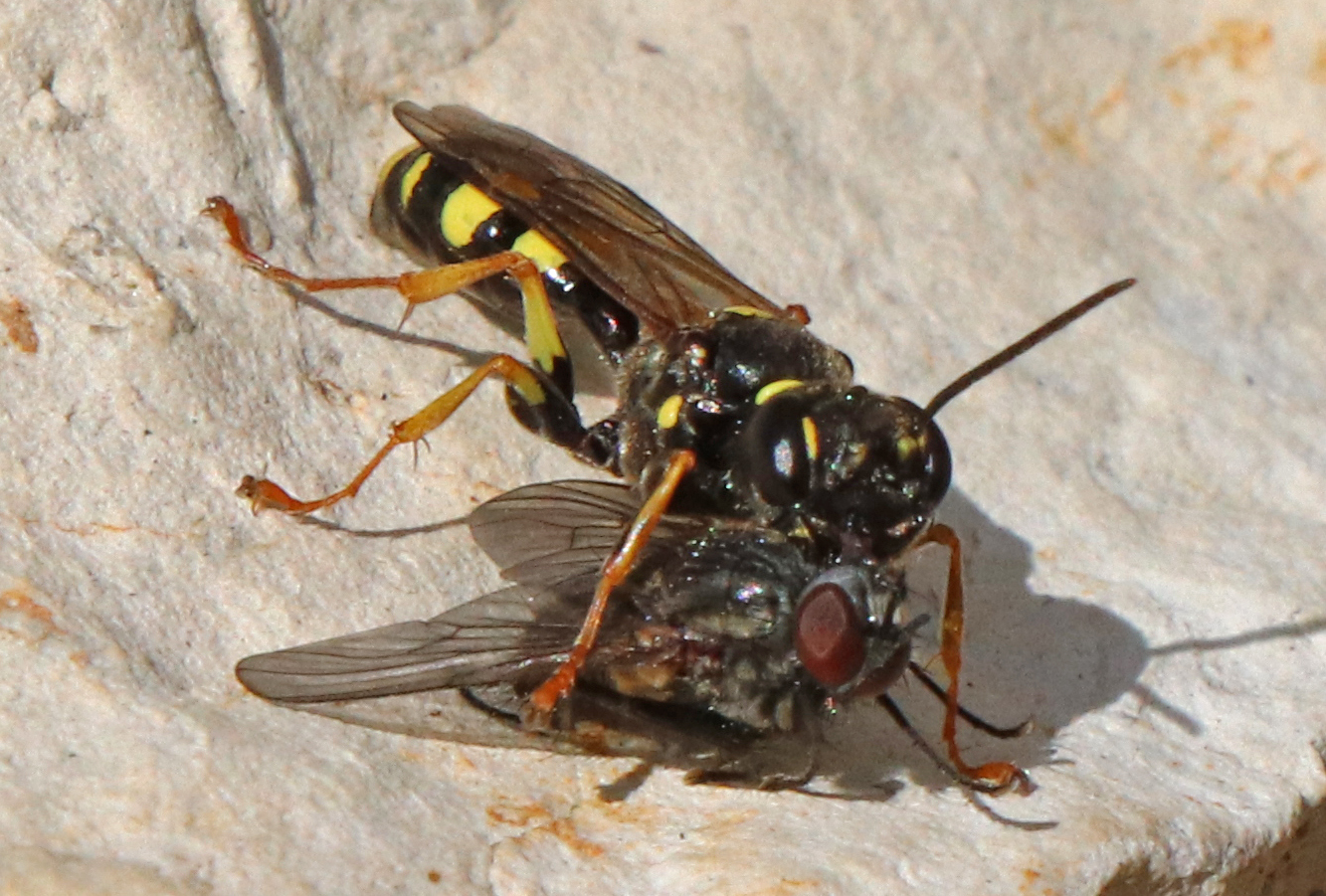 Insects and other invertebrates: During July, there were 15 sightings of five butterfly species: six of Green-veined White, four of Small White, three of Red Admiral (3rd, 14th and 24th), and one each of Small Tortoiseshell (14th) and Orange Tip (17th, unusually late). This was a somewhat better showing than in June but is still rather poor; neither Ringlet nor Meadow Brown were recorded, in contrast to most recent years. Moth records included Six-spot Burnet on 3rd (a new Garden record), Angle Shades and Chamomile Shark (both on 5th), Plain Golden Y (14th), Clouded Border (17th, the first record for eight years), Riband (two dates from 24th), Large Yellow Underwing (four days from 24th), Small Fan-footed Wave (27th and 31st) and several leaf-miners, one of which, Phyllonorycter nicelii on 20th, was another of July’s new Garden records. Wool Carder Bees were seen on eight dates scattered throughout the month but, as in June, only small numbers were seen, although a pair was observed possibly mating on one occasion. Despite the loss of the Garden nest in June, Tree Bumblebees continued to be reported during July. Ashy Mining-bee was seen on 6th while Willughby’s Leaf-cutter Bee was recorded on 18th. Field Digger Wasps were seen in their favoured spot next to the new alpine house from 12th; they have been seen there since the alpine house landscaping was done in 2014 and the light sandy habitat created for the outdoor alpines planted there obviously suits the digger wasps as well. I am indebted to a Garden visitor, Dick Alderson, for his superb photograph of a Field Digger Wasp with prey that he sent in via the Garden’s website. Sawfly records included Bugle Sawfly (five dates throughout the month), Giant Wood-wasp (24th), and the mines of Alder Sawfly and Fenusa dohrii (both 20th). Common Blue Damselfly was seen on 3rd, and the green lacewing, Chrysopa perla on 24th and 27th, the year’s first records of these two groups of insects. Six hoverfly species were seen. It was an astonishingly good month for Great Pied Hoverfly (Volucella pellucens), seen on no fewer than nine dates, while Marmalade, Banded and Striped Hoverflies were also seen on numerous occasions. The remaining two were Eupeodes corollae and Eupeodes luniger, both seen on 5th. Bugs included three new records for the Garden, the leaf-hoppers Oncopsis flavicollis and Edwardsiana lethierryi (both on the same lime tree on 11th) and Solitary Birch Aphid (Monaphis antennata) on 4th. Other hemipteran records included Birch Shield-bug throughout the month, Forest Shield-bug (four dates up to 12th), Gorse Shield-bug (5th only), Hawthorn Shield-bug (11th and 19th), Parent Bug (5th and 12th), Common Flower Bug (six days throughout the month), Birch Catkin Bug (5th and 12th), Common Green Capsid (17th and 28th), Common Froghopper (throughout), Alder Spittlebug (5th, an adult), and Common Sycamore Aphid (12th and 19th). Three more beetles were added to the Garden’s list: Red Poplar Leaf Beetle (which looks rather like a completely unspotted red ladybird) on 17th and which was ‘species 900’ on the Garden’s list, Vine Weevil (24th) and forma annulata of 2-spot Ladybird (also on 24th). The latter has the black spots joined together in a pattern.  Other ladybird records included Seven-spot, 10-spot and Orange Ladybirds as well as the typical form of 2-spot Ladybird. The year’s first Red Soldier Beetles were seen on 3rd and were present throughout the month thereafter. Further July beetles were yet another record of Rosemary Beetle (7th), many more of St John’s-wort Beetle (Chrysolina hypericini) and Figwort Weevil, as well as Common Pollen Beetle (19th) and Brachypterus glaber (6th and 20th). No barkflies or springtails were recorded in July. Invisible Spider (Drapetisca socialis) on 4th was a new Garden record, as was the gall-mite Aceria cephalonea, identified by its gall on sycamore on 11th. Harvestmen began to make their appearance, with Leiobunum rotundum seen on six dates from 4th onwards at the back of the herbarium building, with an amazing maximum of eight present there on 20th. Another harvestman, Paroligolophus agrestis, was also seen elsewhere in the Garden on 4th. A Garden Spider was seen on 10th. Finally, the mines of 18 different leaf-mining flies were recorded in July, seven of them for the first time this year. 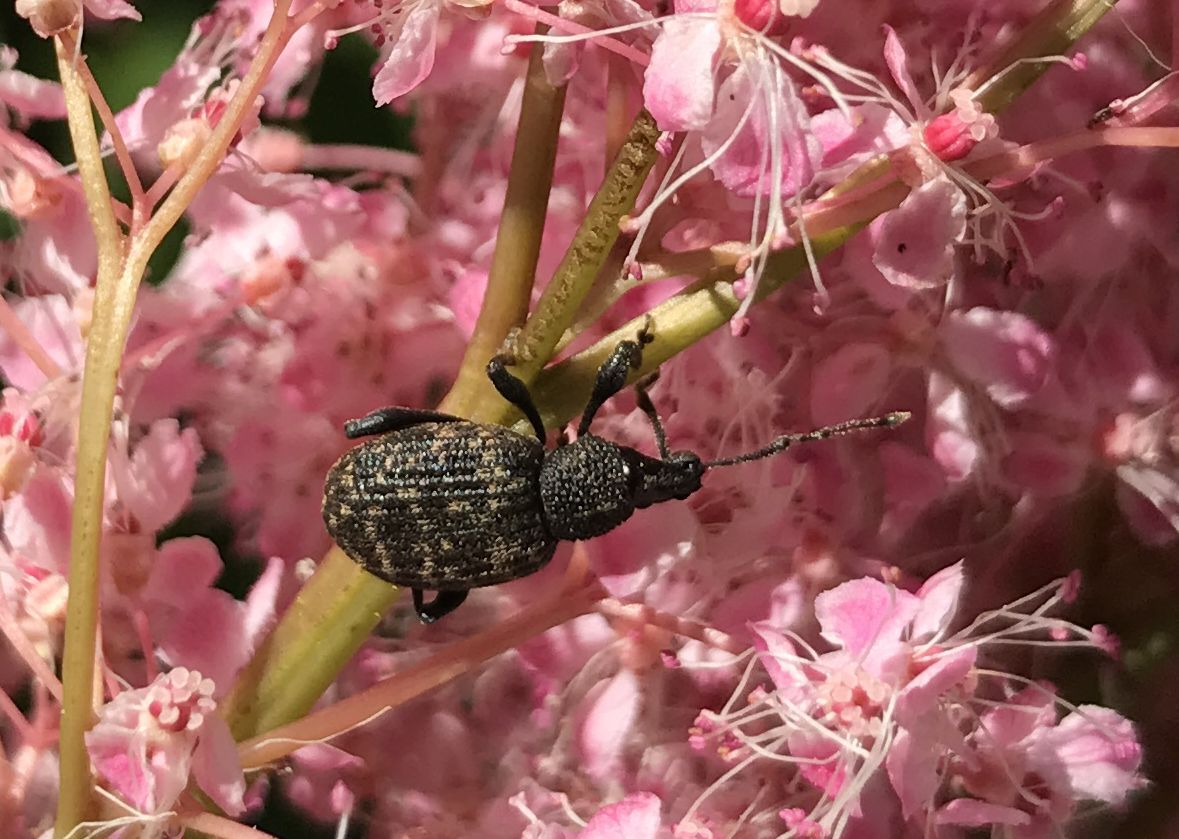