Finding The Lost Words at Logan

This year’s regional garden Schools’ Weeks are inspired by the bestselling book ‘The Lost Words’ which is a collaborative project between writer Robert Macfarlane and artist Jackie Morris which celebrates the relationship between language and the living world, and brings the lost words to life through spell-poems and beautiful illustrations. The exhibition of the original paintings is now on at Inverleith House Gallery at RBGE until September and is not to be missed! 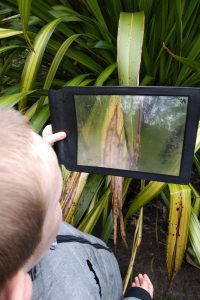 Schools’ team were at Logan Botanic Garden for a week in April to welcome 367 children from 7 local primary schools to the Garden. Starting with a mysterious bag of clues we discovered one of the plants from the book and listened to the beautiful Bluebell poem together before going out to find the bluebells in the beech woodland. Through a hands-on, sensory journey through the nature of the garden, the children practiced the skills that writers and artists use to build up a collection of ‘wonder words’ together to describe what they saw, felt, heard, smelled or touched along the way. These words could be used to write poems back at school.

Finally they created some simple, natural art of their chosen plant or animal to celebrate and share its essence with others. 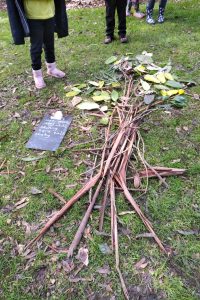 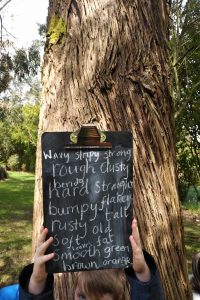 Children got caught up in the magic of exploring things in different ways and enjoyed collecting their own words for things they found. We believe that being given the freedom to explore outdoors whilst nurturing a sense of wonder can lead to more connection with nature at a time when more children live in urban areas.

We look forward to taking the programme to Benmore and Dawyck in autumn and would like to thank the players of the People’s Postcode Lottery for providing funding to enable schools to take part.