Pulsatilla turczaninovii is a native to the grassy slopes of E & N Asia into Siberia. It is a herbaceous clump former amassed with flowers. The sepals a blue/violet colour with contrasting yellow anthers. Magnificent as a mature plant on the alpine wall. The foliage is covered in a multitude of tiny silver hairs, preventing damage from desiccating winds and bright sunlight.

Rhododendron recurvoides an evergreen shrubby species collected by Frank Kingdom Ward in Arunachal Pradesh, India where, I quote from his notes he found it “scattered on the sunniest slope of steep granite screes.” That gives us an idea of its preferred requirement in cultivation. Growing in the rock garden flushed with mottled pink trusses of flowers.

Erythronium dens-canis “The Dog’s Tooth Violet” colonises peat banks amongst shrubby ground cover in the Catalan area of Spain. It has a Eurasian distribution. Loves a deep moist woodland soil where the bulb can extend downwards to vaguely resemble a fang hence the common name. The leaves are heavily mottled brown and set opposite in pairs giving rise to flower stalks terminating in a single flower. Reflexed pink petals with prominent extended flower parts. The silver grey anthers shed a similar coloured pollen. 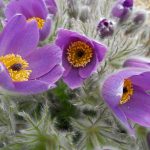 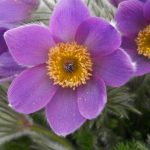 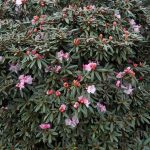 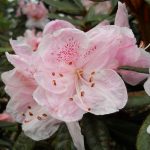 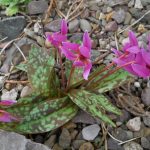 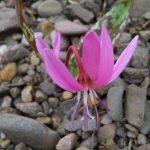