Bergamo: House in the Mountains

The plethora of international connections within RBGE has its botanical and personal perks. In the summer, before starting my second year of the Plantsmanship HND, I spent 5 weeks doing a gardening internship in the stunning botanical gardens of Bergamo.

The ‘House in the Mountains’ as named by the Gauls, Bergamo was praised by Marcus Tullius Cicero for its fertile soil. Having the chance to explore the historically green depths of the city was pretty hard-hitting. Leaving Edinburgh where the term ‘urban greening’ has to be coined to tempt city planners accommodating any form of greenery, the contrast hit immediately. Asides from 30 degree sunshine-filled heat, the centre of the ‘Upper Town’/ Citta Alta (the oldest part of the city that looks over the newer ‘Lower Town/Citta Bassa’)  devotes itself to a lush and rugged green valley- the residence of some lucky horses and donkeys. Other ungrazed valleys form around the Citta Alta’s north, east and west sides. 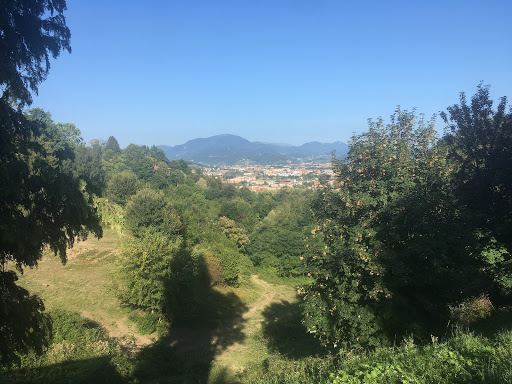 I did have some futuristic visions of that prime area becoming a garden (stay tuned). Beyond, cultivated terraces on green hillside villages, with the outline of the southern Alps adding some drama. This scenery surrounds the upper town from all sides, instilling the prominence of nature in the region. Being the first visit abroad for 4 years, sensitivity of being in a different environment was perhaps exacerbated. 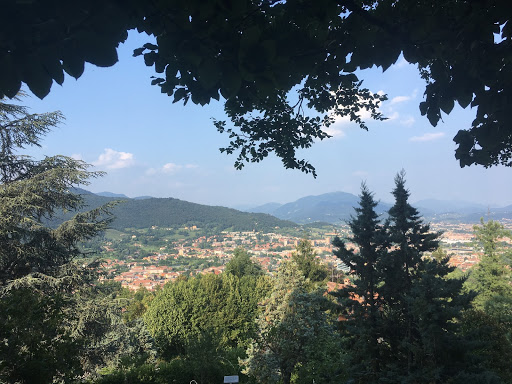 The Garden’s panoramic view to the mountains commands attention. Here, the lull before one of many thunderstorms approached.

Storms in Bergamo leave Scotland shaking in timidity. The type that start with a light breeze gathering to a howling, the sky darkens (waiters rush to clear the table preparations they’ve just spent half an hour laying out) then a soak to the skin downpour sheeting of rain… or golf ball sized hailstones. Streets clear and shelter sought, it’s pretty surreal to experience such a force. Lasting into the night, the sky is alight by what I could only term as sky raving- flashes lighting the whole sky and angry thunder shouts. 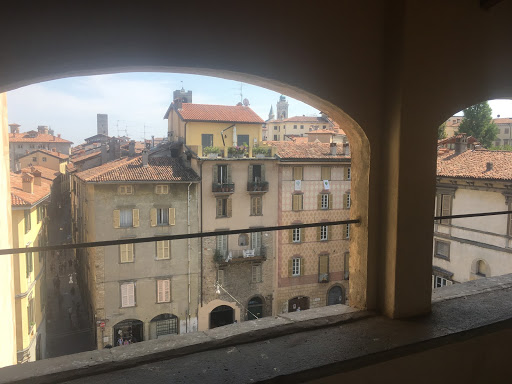 A balcony perch to hear the full decibel range of bells and tourists alike.

Luckily enough I had been given prime views in my lodgings to act as storm watchman. Based in the main Cittadella, in Citta Alta, the clock tower dates back to the 1300’s , and has the earthy coloured remains of frescoes painted long ago. At night, having watched a lot of horror films too young, I was sure there was a ghoulish presence roaming the stairs. It was lovely to hear  bat squeaks near the window, watching them (gladly) feast on mosquitoes in the Piazza Mascheroni I looked over.  As the tower is part of the Natural Science museum I had mammoths, dinosaurs and all other beasts below me too.

The one creature issue I encountered was the mosquitos. I laced myself with repellant,  religiously ate 3 cloves of garlic in the morning and topped up with more at lunchtime. Aedes albopictus or Eastern Tiger mosquito listens not. To anything my fair Scottish self did I had them feeding all over me, with clothing offering no barrier. 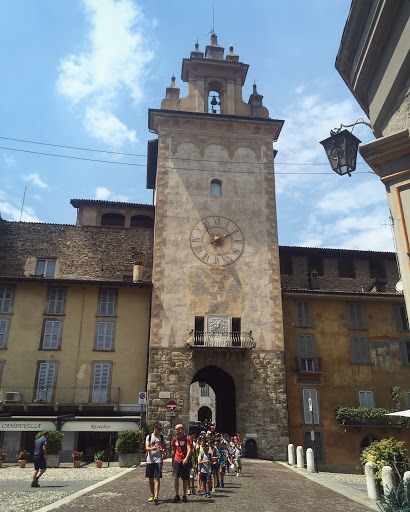 Citta Alta, in the noise of the bells of each tower chiming in each hour, morning and evening mass, acts as a social collectivism. It recreates a time when phones were nothing but a whimsical dream. I can but imagine.

Orto Botanico ‘Lorenzo Rota’s’ arrival, like reaching Bergamo’s Upper town, requires uphill effort. The garden was opened in 1972, but going further back in time visitors are greeted by a Venetian gunpowder house and walls at the garden’s base. The scene adds to the immersion of history prevalent in the whole Upper Town. You are (almost) distracted from counting the 141 steps to the garden by illustrative information plaques on the garden and Earth’s evolution.

On reaching the main garden, you are rewarded with an intriguing and personable sized garden. There is no stuffiness in its style, its rustic charm allows the surrounding nature to take some ownership. Rockery beds led by twisting paths make visitors have to personally engage with the dominating alpine aspect.

A full view of the mountain peaks sweeps across the background…until getting closer becoming the foreground; the garden’s planting framing this and fully steering the outward-looking gaze. It’s a garden for sanctuary, for one to fully admire the natural beauty of the area; the naturalistic planting, the landscape, and the city’s buildings seemingly not in conflict with this. 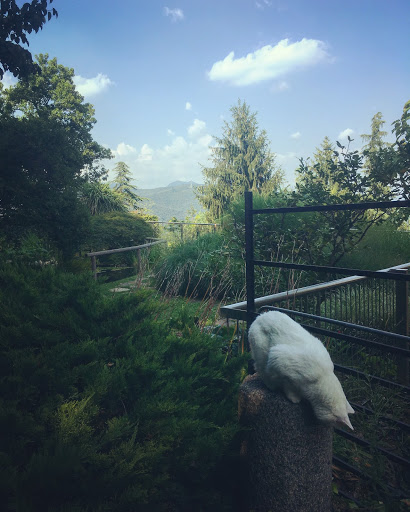 Orto Botanico ‘Lorenzo Rota’ has many feline doters to accompany you while you work. 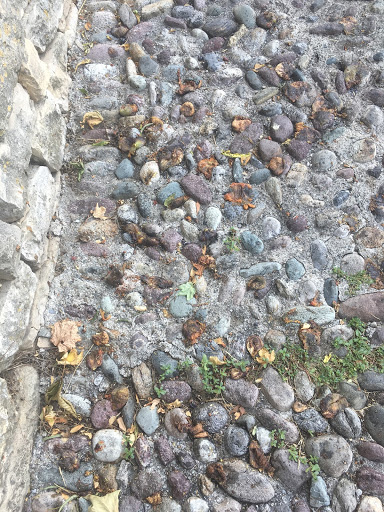 Bergamo botanical gardens is split in two sections: the older ‘Lorenzo Rota’ in the Upper Town, and the ‘Astino section’ of the garden also named the ‘Valley of Biodiversity’ that sits east of this, in the green valley depths of Bergamo’s outskirts. A millennial project, Astino offers a visual and edible journey through 300 species and 1500 varieties that grow here. Money is raised by local auctions selling the bountiful fare produced in the garden.

A scenic 20 minute walk to the Astino Valley section of the gardens has views over the flat expanse of the Citta bassa and beyond. Lined by Venetian walls, with ethereal flowering Caper, Capparis spinosa and opportunist Fig, Ficus carica harnessing themselves deep in the bricks. The valley banks either side of my winding road are teased by fig, sharon fruit, plum, apple and pear trees serving the ground a very good fruitful feast. Each time, I had to resist the urge to climb up and over the old walls to the fruit laden trees.

Being on private land and me not powered with a plethora of language skills kept me on the right road path and out of sticky situations. The cobbled roads were at points covered with a fig and plum paste- stickiness couldn’t be avoided. 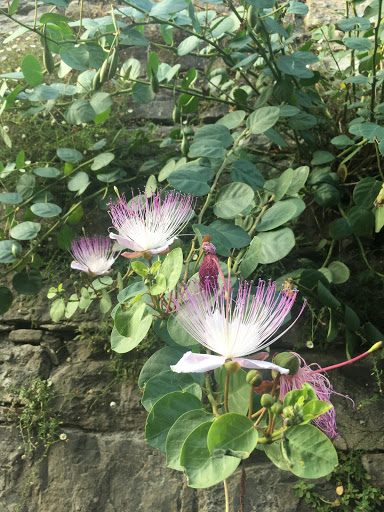 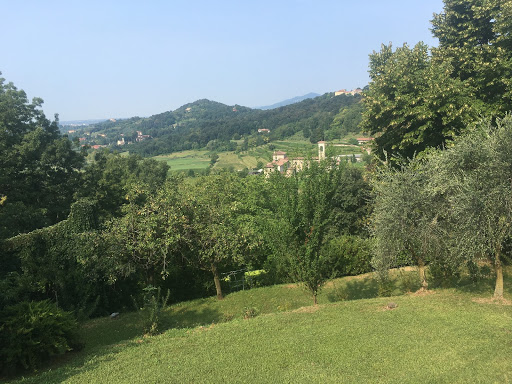 Via Astino – the walk through the valley to the Valley of Biodiversity is on a steep gradient with terraced cultivation on either bank side. 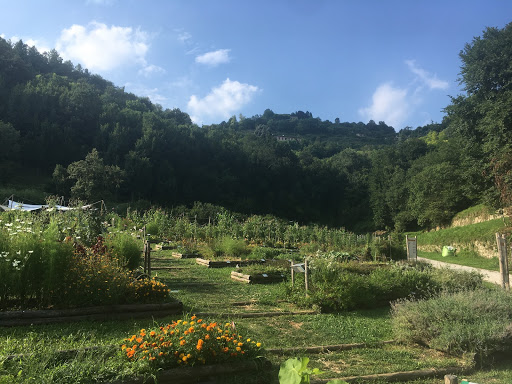 The ‘Valley of Biodiversity’ lies at the base of the very green Astino valley.

Out of the gardens, water fountains pose an opportune for social exchange, breaking the ice between Bergamo peoples and tourists alike. The tourists willing to use them. Something the Italians take for granted, but myself I see as unglorified gold mines throughout  the city. (Plane tree) Platanus orientalis lining the streets and pavements provides for basking shade in the heat of the midday sun. Being Scottish and embracing the sun while I could, I took the abandoned sun-drenched benches. Always. The city’s affinity with plants is obvious walking past the blocks of residential buildings. Gravity and space is defied as substantial planters form thick green screens on most balconies. I only noticed a few balconies gilded with fake (Ivy) Hedera helix drapings throughout my 5 week stay.

I would highly recommend a visit, and I certainly will make a return. I won’t be able to stay as Quasimodo with my (un)imagined ghouls, but I left in the security of knowing the place and people, accompanied by erratic weather will be still there. 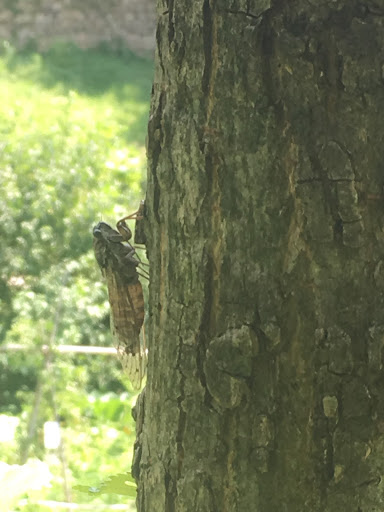 ..As well as the cacophonous sound of tree crickets that reliably fills any silent contemplations of awe. 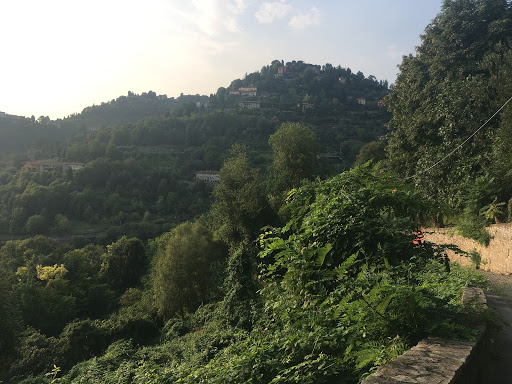 To capture the scope of green-ness and feel of Astino valley and Bergamo itself is a hard feat, and why I found this so difficult to write. To reduce a place with so much life and naturalness to a blog sparks raw emotion.