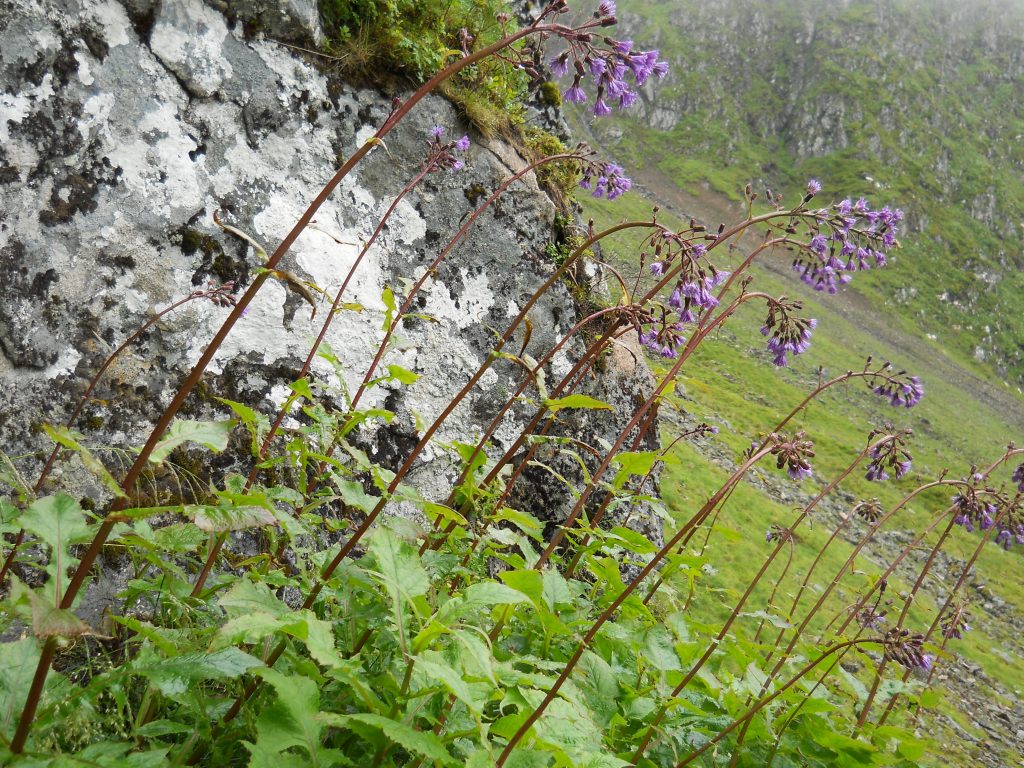 Stand of C. alpina swaying in the wind. They are tall and striking on their own and can bloom until early September.

Cicerbita alpina, colloquially named Alpine Sow-thistle is a Nationally Rare plant that is confined within the UK to Scotland, where it is at the very western edge of its European distribution.  It is the tallest alpine perennial herb that is encountered by adventurous botanists above 700m altitude, reaching 50 to 150cm in height.  The inflorescence is composed of blue-violet florets held atop red-tinted stems that are soft and flexible making them better able to withstand heavy winds.  The leaves are broad, triangular, clasping the stem and their tender texture and fresh green colour render them very palatable to herbivores.  For that reason, the historic populations of C. alpina in Scotland have declined over the centuries; they have almost been grazed out of existence!   It is thought that C. alpina populations used to be widely distributed in high elevation open woodland and along water courses, but they are now reduced to scattered relicts at only four sites in the Cairngorms.  These isolated populations grow in small, compact colonies, on ledges and steep gullies inaccessible to grazing animals but at risk from erosion and catastrophic one-off events, such as rockfalls and landslides. 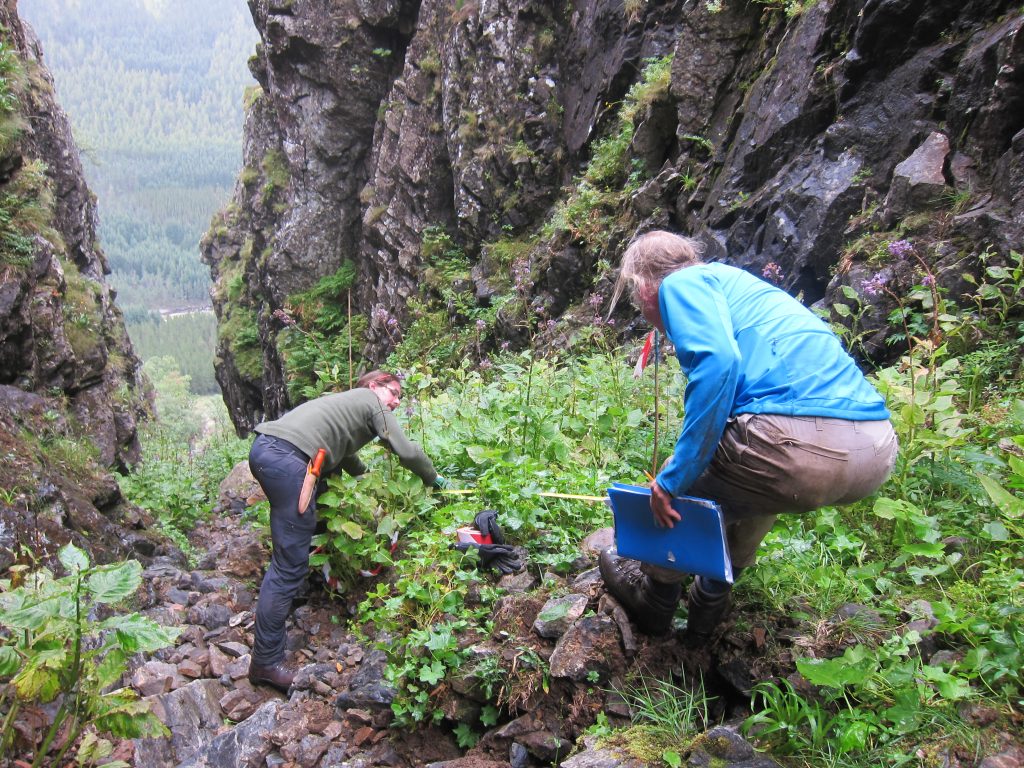 Measuring and monitoring a population of C. alpina

Over past decades RBGE has been working in partnership with the Scottish Natural Heritage (SNH) in setting and achieving clear and measurable goals for the conservation of the C. alpina.  A new phase of conservation work kick-started in 2015 with further close monitoring of all existing populations, collection of samples for genetic analysis and extracting rootstock under licence for plant propagation. 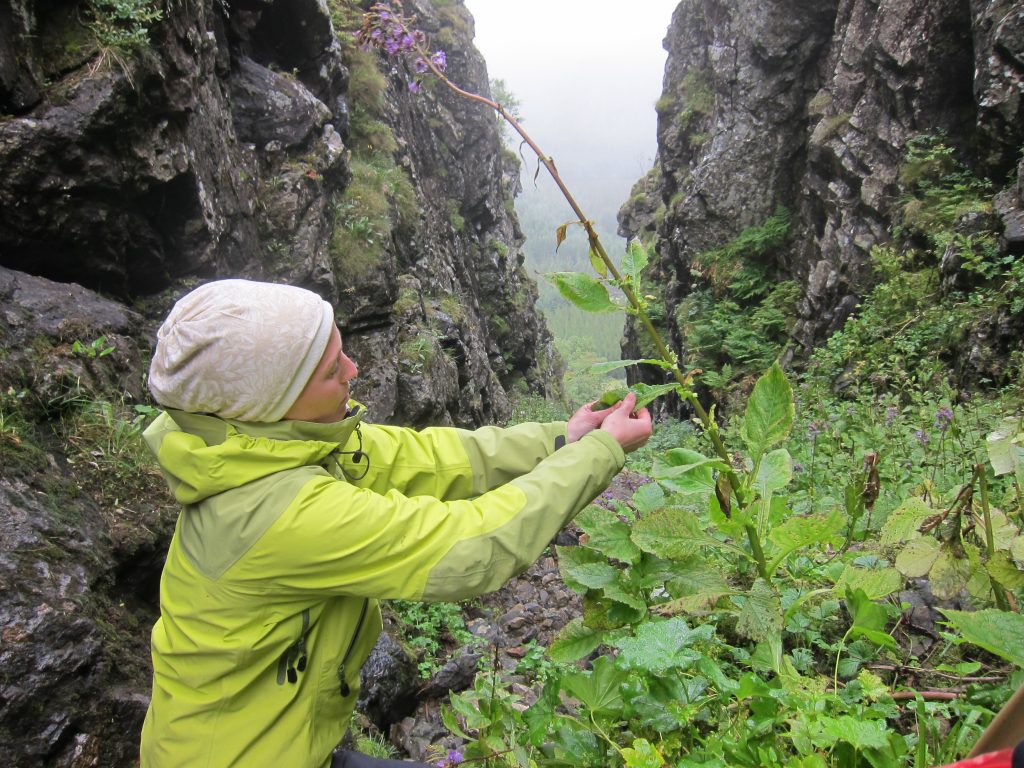 Fieldwork was demanding, and often required skills in rock climbing.  The plant populations occur between 800 and over 1000m altitude, on vertical rock-face and can be reached with safety only with ropes.   However, with a pair of binoculars they can be observed from below.

A translocation attempt into inaccessible sites less vulnerable to catastrophic impact was considered the best option for securing the future of the species.

Two sites in Glen Doll were selected as being suitable.  The sites support the ground flora that is typically associated with C. alpina, offering grassy pockets for planting into constantly wet but free-draining soil which Cicerbita favours.  Crucially both sites lie within a fenced enclosure, therefore offering an additional protection from large herbivores.  Planting material consisted of two C. alpina clones grown on from the division of wild-collected rootstock.

In September 2017, a team of five members of RBGE staff went uphill planting.  Graeme Dey (MSP) joined the expedition and his participation that day was invaluable.  Not only did he add to the workforce but as Species Champion for Salix lanata (Woolly Willow) Graeme’s presence helped to highlight our responsibilities in safeguarding Scotland’s rare and unique flora. 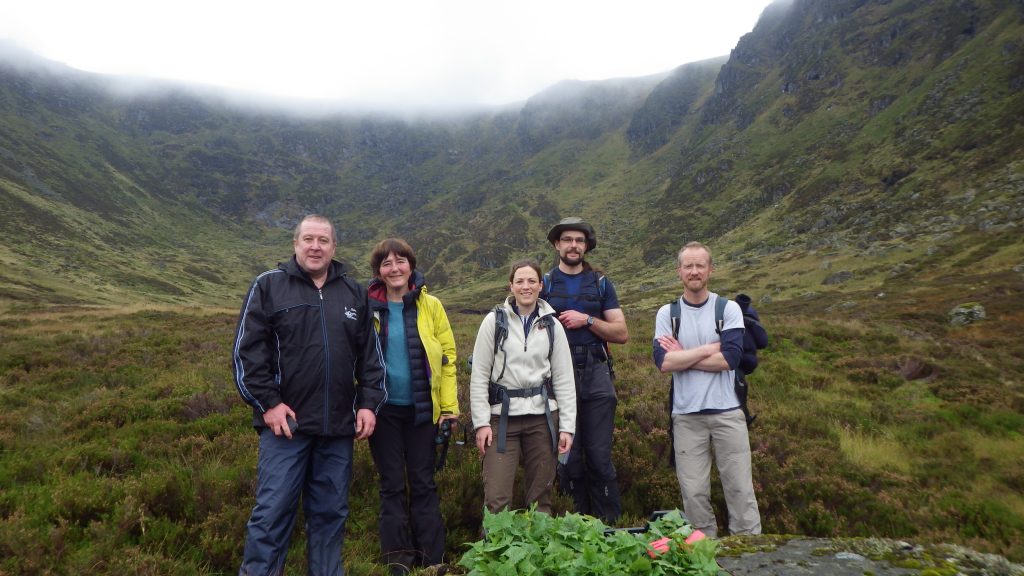 The Team ready to set off

The weather was wet, but the misty mountain tops gave the unique atmospheric quality of a true Scottish experience! 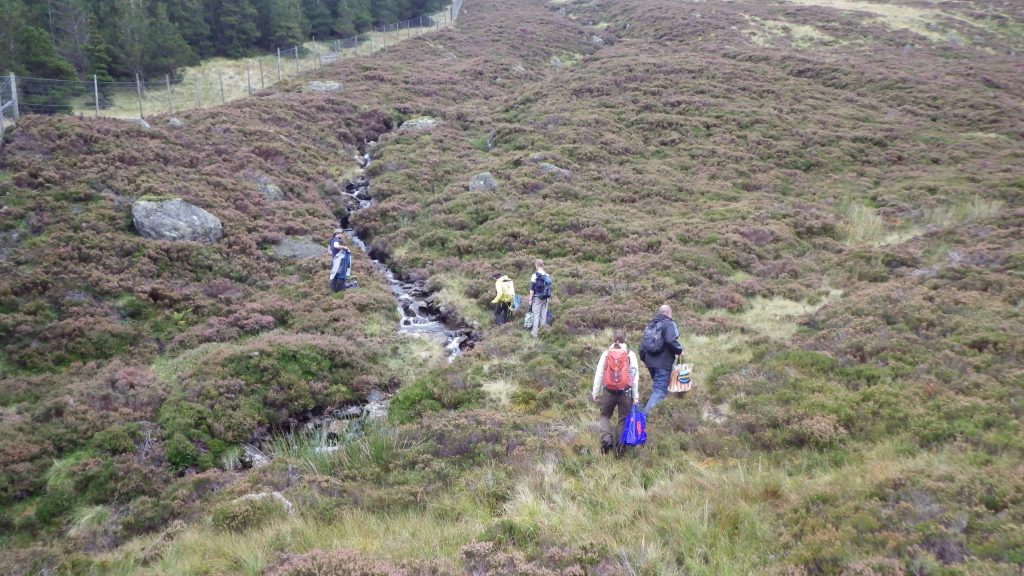 Walking uphill on the outward journey with bags and crates of plants.

The route to our final destination transitioned from a walk through a boulder-strewn corrie floor to a scramble over wet rocks and heather. Rest stops provided opportunities for checking on old and young specimens of Salix lanata. 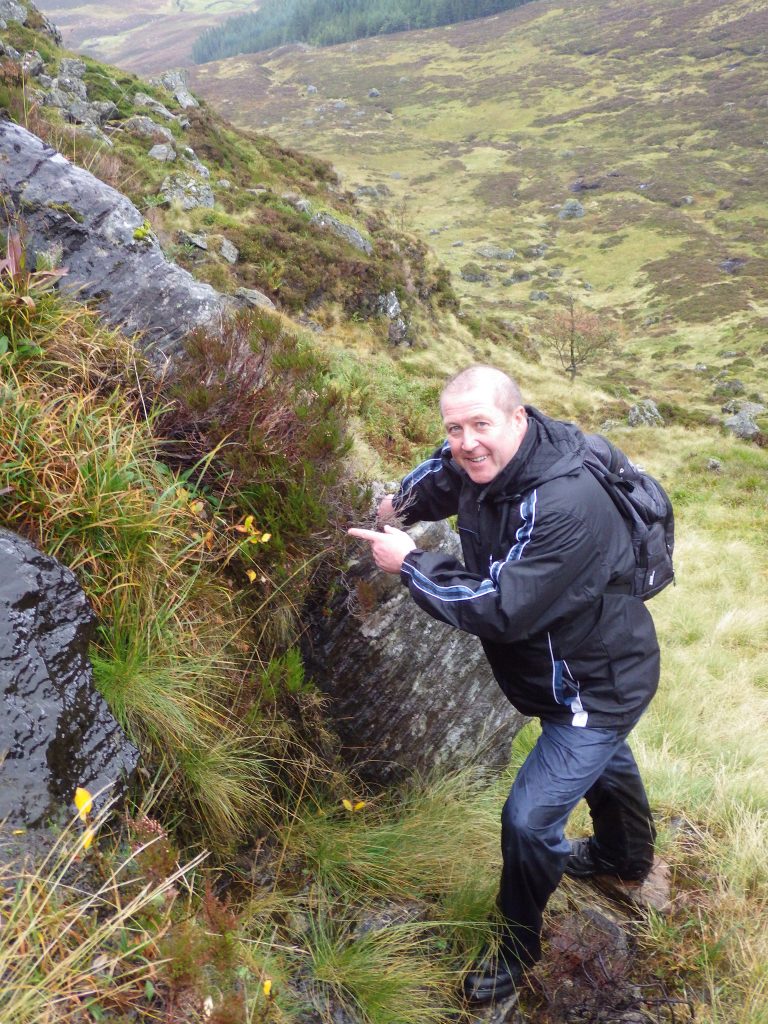 Graeme Dey pointing to healthy specimens of Salix lanata which were planted by RBGE and SNH as part of their Recovery Programme.

We reached the planting sites after about 3 hours.  So that no time was lost, layout was pre-planned, plants were readily unpacked and sorted, and the planting was straightforward.  Extreme care was taken to minimise any damage to the site.  Planting in steep mountainous areas can require acrobatics and is challenging at times, particularly when looking for a spot that is both suitable for planting and secure enough to work.

The sorted and grouped plants were positioned in a structured, patchwork manner.  Individual plants were inserted as deep as possible and soil around was firmed down well, to prevent the root-ball being dislodged by frost heave.  We flagged the plants for photographic records and removed the flags afterwards.

Our planting trial is inevitably experimental in nature.  It will take some years for the plants to establish and, hopefully, to persist and to reproduce.  This is why monitoring the performance of individual plants is an integral part of the present translocation programme.  We will follow and record the development of the plants over future decades and any knowledge gained from success or failure will be used to refine future conservation practise.