On some botanical mondegreens and Hobson-Jobsons

A new word was added to my vocabulary last week, as also a generic usage for one long known to me from Indian pursuits. Curiously these were made during an excursion to Kirkcaldy, while making use of my newly acquired free bus pass. En route, peeping above the modern housing estates of Dalgety Bay, I noticed the architectural fragments of Donibristle, the once great Lowland estate of the Earls of Moray – the pavilions of the mansion and the sad, baroque shell of the mortuary chapel, both the work of the architect Alexander McGill. In an email to an erudite friend I pondered on the cause of decline of the noble house to which, instantaneously, came the gnomic response ‘Mondegreen sickness’. I was mystified and suspected dodgy typing, but no, Wikipedia came to the rescue with the meaning of this 1954 coinage – a mishearing by Sylvia Wright of a line from the old Scots ballad The Bonnie Earl o’ Moray. ‘They hae slain the Earl o’ Moray/and laid him on the green’, which she heard as ‘they hae slain the Earl o’ Moray/and the Lady Mondegreen’. Traditional schoolboy chapel-humour (”Gladly’, my cross-eyed bear’; ‘God is walking his porpoise out’) and the hilarious Ronnie Barker ‘fork ‘andles’ sketch have, it emerged, been taxonomised. The article also described a related category – an Englished mishearing of a word in a foreign language as a ‘Hobson-Jobson’, taken from the title of that fascinating lexicon of Anglo-Indian words started by Cleghorn’s school friend the Indian engineer Col. Henry Yule and completed by the Madras Civil Servant Arthur Coke Burnell. The authors explain it as a mishearing of the Muharram processional cry ‘Ya Hasan! Ya Hosain!’

In reflective mood, this brought to mind several plant names from my Yorkshire childhood: English vernacular names arising from the mishearing of a Latin generic noun or a specific epithet. Little did I then imagine that these might be examples of named figures of speech. Ruth Kilby, my earliest botanical guru, in the pretty magnesian-limestone village of Boston Spa, unwittingly introduced me to two. She explained that the English name ‘gallant soldier’ for a scruffy little New World Composite was a gardener’s corruption – a mishearing of the generic name Galinsoga – applied to an annual, though resilient and persistent, weed “oh, he’s a gallant little soldier”. The other was a personal one: ‘ossities’ for forget-me-nots. In her childhood in the neighbouring village of Clifford, in the cottage garden of an old man, was a fine display of Myosotis, proudly introduced as “them’s me ossities”. 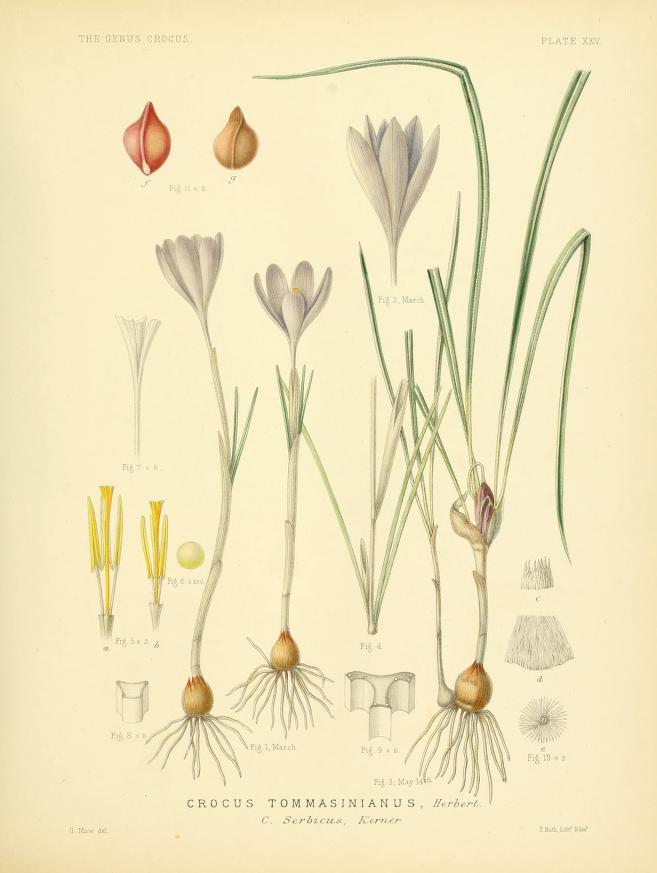 Crocus tommasinianus.
A monograph of the genus Crocus. With an appendix on the etymology of the words crocus and saffron by C.C. Lacaita. (1886)

My granny Doris Woolliscroft in Wetherby, a little further up the stately course of the lower Wharfe, was another early source of botanical and horticultural inspiration. I now see that her own names for two garden plants were either Hobson-Jobsons or mondegreens. Tumbling over a wall at the top of her garden were clumps of the silver-leaved, white flowered, stitchwort-relative generally known as ‘snow in summer’, but to her ‘Tommy Totum’ – clearly a Hobson-Jobson from the epithet of Cerastium tomentosum. In early Spring her three favourite crocuses were ‘Zwanenburg Bronze’, ‘Cream Beauty’ and the slender, almost ghostly, mauve species that she charmingly referred to as ‘Thomas Aninas’. There is some difficulty here in deciding its classification. Is it a Hobson-Jobson or a mondegreen? On balance, I think, the latter. Its etymology is a mishearing of the Latin epithet of Crocus tomassinianus, but, as the language has not really been changed (merely a few letters rearranged and two omitted), it surely counts as a mondegreen. This Dalmatian species was named by the Hon. and Rev. William Herbert for the Trieste-based botanist Muzio di Tomassini and there is a local connection. From 1814 to 1840 Herbert was Rector of Spofforth, the next-door village to Wetherby, where he grew many of the bulbs on which he was a great expert, and undertook the hybridization work that was of such interest to Darwin. My grandmother, however, was a woman of deep faith, so there was clearly also a confusion with a canonised mediaeval theologian, but as Aquinas and Aninas both sound Latinate, this surely also makes the name a mondegreen. Did my grandmother therefore inadvertently invent another category – the ‘vegetable double mondegreen’ – or should that be ‘fetch a table …. dub the Monty queen?’

Doubtless readers of this blog will be able to provide many more botanical examples.