The Battle of Glen Tilt 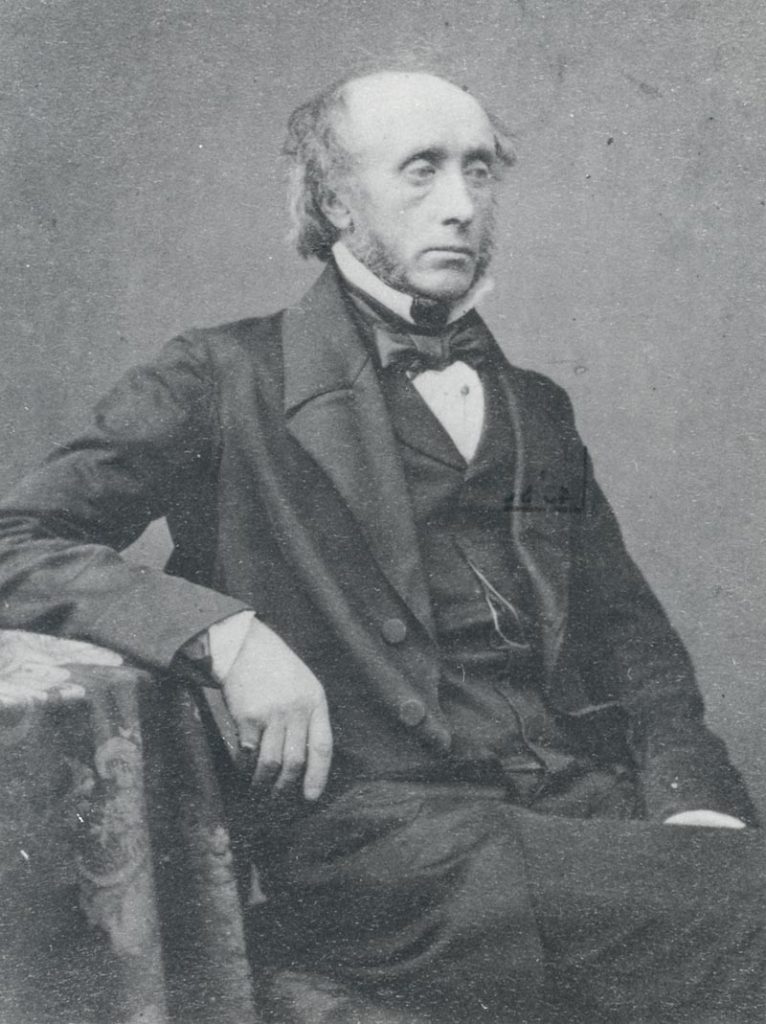 John Hutton Balfour, Regius Keeper at the RBGE and Professor of Botany at the University of Edinburgh between 1845 and 1879, was known for being an excellent teacher. Keen to use all the tools available to him at the time, the RBGE Archives still have some of his teaching diagrams, plant models and even one of his microscopes. He was particularly keen on the use of botanical excursions; taking colleagues and students on field trips, some taking only an afternoon, some lasting over a week; most around Scotland, but some went further afield, once even to Switzerland. Some of Balfour’s excursion diaries still exist, crammed full of train tickets, hotel bills and plant lists of course.

One particular excursion, in August 1847 to the Braemar and Loch Tay area, became infamous due to an incident that occurred there that became known as the ‘Battle of Glen Tilt’, making legal history and becoming part of the foundations of the Scottish Rights of Way Society. 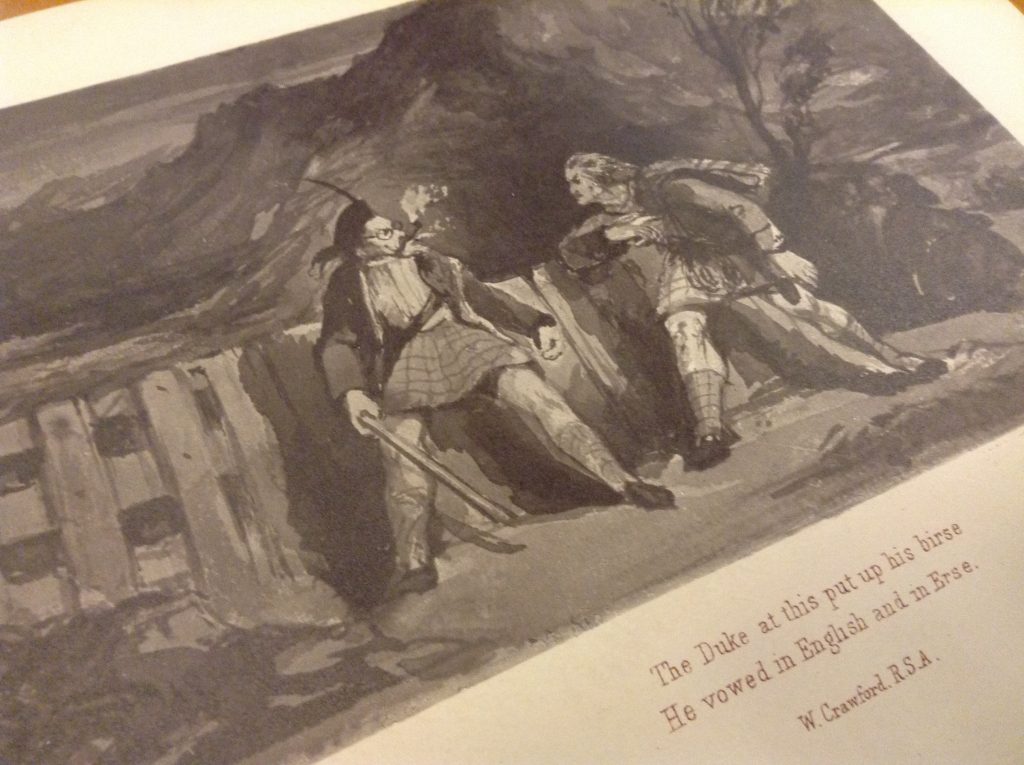 “The Duke at this put up his birse;
He vowed, in English and in Erse”
W. Crawford, R.S.A.
from Maclagan’s ‘Nugae Canorae Medicae’

On Saturday the 21st August 1847 the party left Braemar by carriage to the north end of Glen Tilt, the idea being to spend the day botanising through the Glen and finishing up in Blair Athol by evening. This was to be a repeat of a journey Balfour had undertaken as a student in 1830, under the supervision of his tutor, his predecessor as Regius Keeper at RBGE, Robert Graham. Balfour’s father’s cousin James Hutton had even studied the geology of this glen in 1785 – Balfour was sure it was a public right of way. The Duke of Athol, however, begged to differ. As the students neared the foot of the glen they found their way barred by the Duke’s gillies – they could not pass without the Duke’s permission. 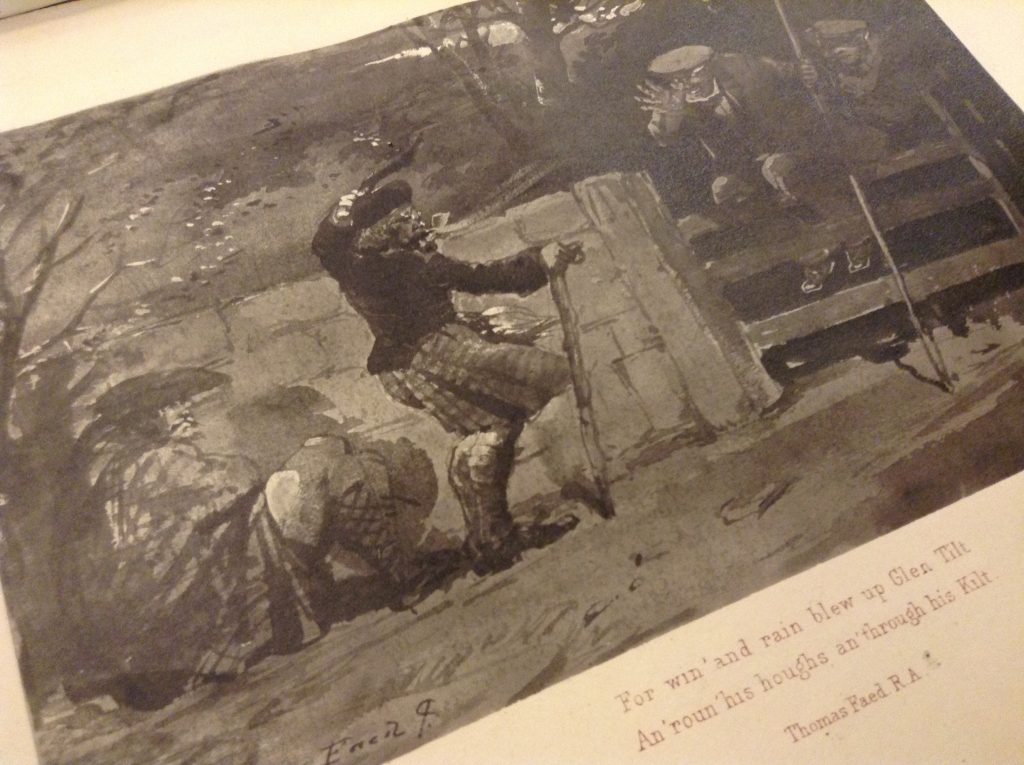 “For win’ and rain blew up Glen Tilt
An’ roun’ his hough an’ through his Kilt”
Thomas Faed, R.A.
from Maclagan’s ‘Nugae Canorae Medicae’

The party waited in the pouring rain for the Duke to arrive and there then commenced a war of words between him and Balfour, with the Duke refusing to give way and Balfour refusing to return back the way he’d come; an impossible idea! It seemed he was suspicious that Balfour was in league with the Edinburgh Footpath Society and was deliberately testing the Duke; when Balfour denied this he became more obstinate than before, knowing that Balfour didn’t have the weight of a society behind him. Balfour did have friends in high places though and it wasn’t long before the ‘outrage’ had been nicknamed the ‘Battle of Glen Tilt’,  with it making the newspapers, becoming immortalised in song (see below) and even being used as a subject for an Edinburgh sketching club. People were finally challenging the Duke and within a few years two other men actually took him to court and the Duke was given no choice but to allow walkers to pass freely through the glen. 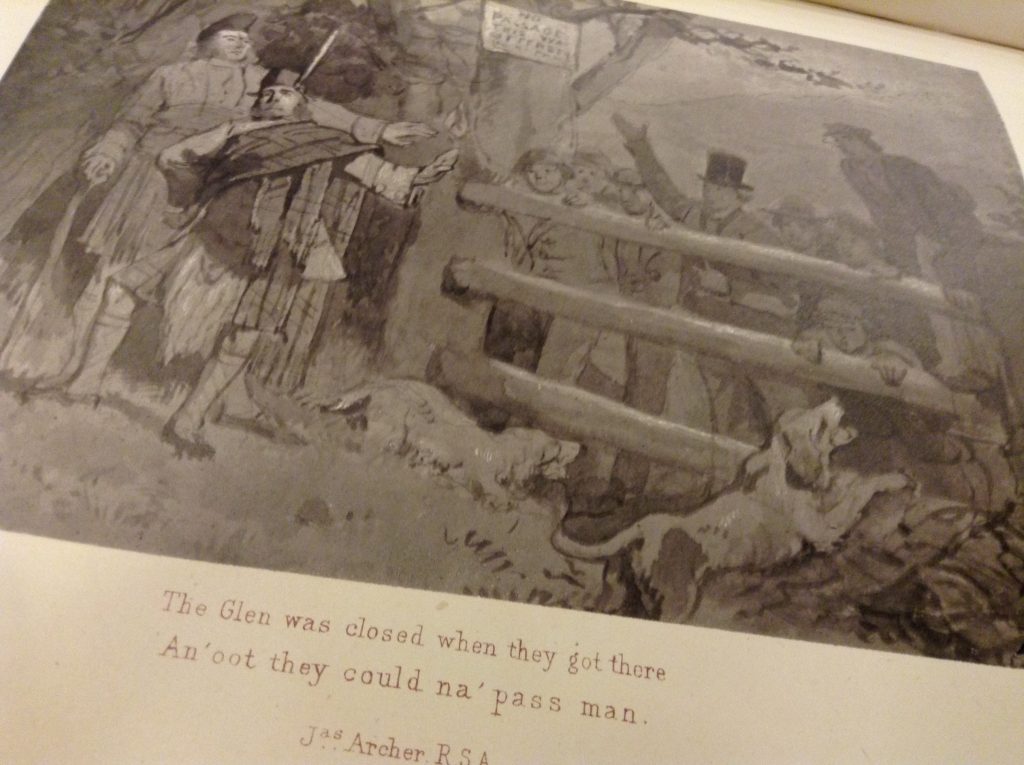 “The Glen was closed when they got there,
And out they couldna pass, man”
James Archer, R.S.A.
from Maclagan’s ‘Nugae Canorae Medicae’

How did the battle end for Balfour? After around 3 hours of waiting and arguing in the rain, the party turned back but found they couldn’t locate another way of crossing the swollen river so they eventually resorted to jumping over a wall and escaping down to the inn at Blair Athol, followed the whole time by the Duke’s gillies who even kept a watch at the inn door! 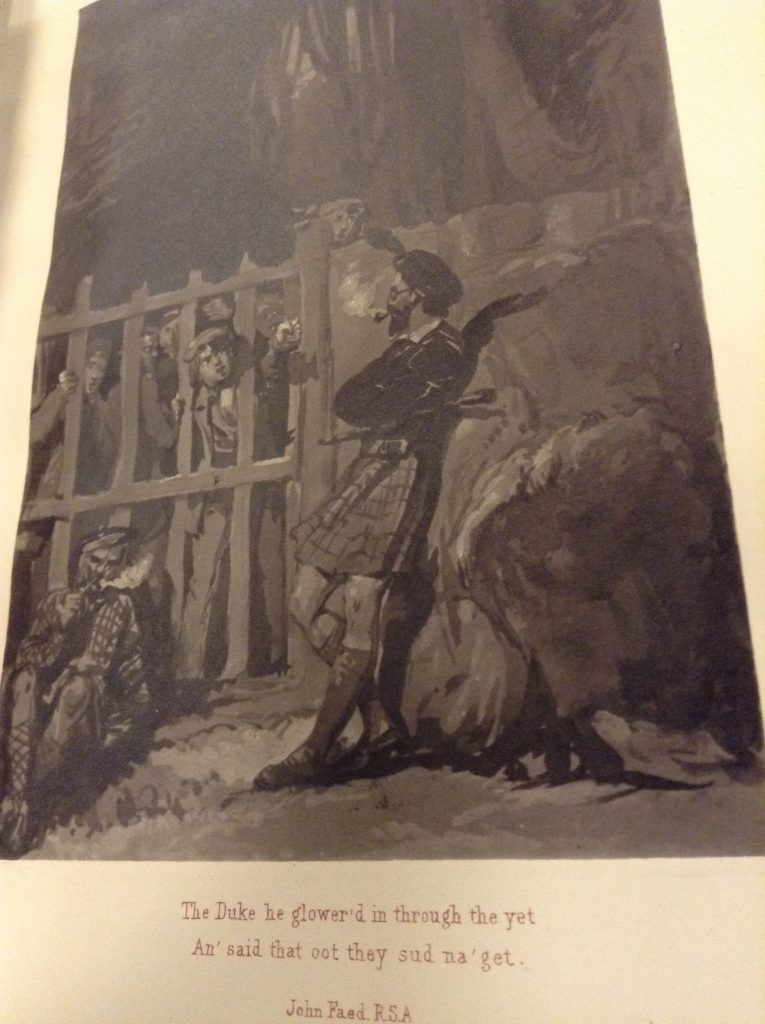 “The Duke he glower’d in through the yet,
And said that out they sudna get”
John Faed, R.S.A.
from Maclagan’s ‘Nugae Canorae Medicae’

There follows selected passages from ‘The Battle o’ Glen Tilt’ written by Balfour’s friend Douglas Maclagan to the tune of ‘The Battle of Sherramuir‘ (of which it is a parody) and published in ‘Nugae Canorae Medicae’ in 1850 and again in 1873.

“Some folk’ll tak’ a heap o’ fash
For unco little en’, man;
An’ meikle time an’ meikle cash
For nocht ava’ they’ll spen’, man.
Thae chaps had come a hunder’ mile
For what was hardly worth their while:
‘Twas a’ to poo
Some gerse [grass] that grew
On Ben M’Dhu,
That ne’er a coo
Would care to pit her mouth till.”

“The gers was poo’t, the boxes fill’t,
An’ syne the hail clamjamphrie
Would tak’ the road by Glen o’ Tilt,
Awa’ to whar’ they cam’ frae.
The Duke at this put up his birse;
He vowed, in English and in Erse,
That Saxon fit
Su’d never get
A’e single bit
Throughout his yet [gate],
Amang the Hielan’ hills, man.”

“Balfour he had a mind as weel
As ony Duke could ha’e, man;
Quo’ he, ‘There’s ne’er a kilted chiel
Shall drive us back this day, man.
It’s justice and it’s public richt;
We’ll pass Glen Tilt afore the nicht;
For Dukes shall we
Care a’e bawbee?
The road’s as free
To you an’ me
As to his Grace himsel’, man.’”

“The Sassenachs they cam’ doon to Blair,
And marched as bauld as brass, man;
The Glen was closed when they got there,
And out they couldna pass, man:
The Duke he glower’d in through the yet,
And said that out they sudna get;
‘Twas trespass clear
Their comin’ here,
For they wad fear
Awa’ his deer,
Amang the Hielan’ hills, man.”

“Balfour he said it was absurd;
The Duke was in a rage, man;
He said he wadna hear a word,
Although they spak’ an age, man.
The mair they fleeched, the mair they spoke,
The mair the Duke blew out his smoke.
He said, (guid lack!)
Balfour micht tak’
An’ carry back
His Saxon pack
Ayont the Hielan’ hills, man.”

“The gangin’ back was easier said
Than it was dune, by far, man;
The nearest place to rest their head
Was up ayont Braemar, man:
‘Twas best to seek Blair Athole Inn,
For they were drookit to the skin:
Sae syne they a’
Lap o’er a wa’,
An’ ran awa’,
Wi’ a guffaw,
An’ left the Hielan’ hills, man.”

“The battle it was ended then,
Afore ‘t was focht ava’, man;
An’ noo some ither chaps are gaen
To tak’ the Duke to law, man.
Ochon! your Grace, my bonny man,
An’ ye had sense as ye’ ha’e lan’,
Ye’d been this hour
Ayont the po’er
O’ lawyers dour,
An’ let Balfour
Gang through your Hielan’ hills, man.” 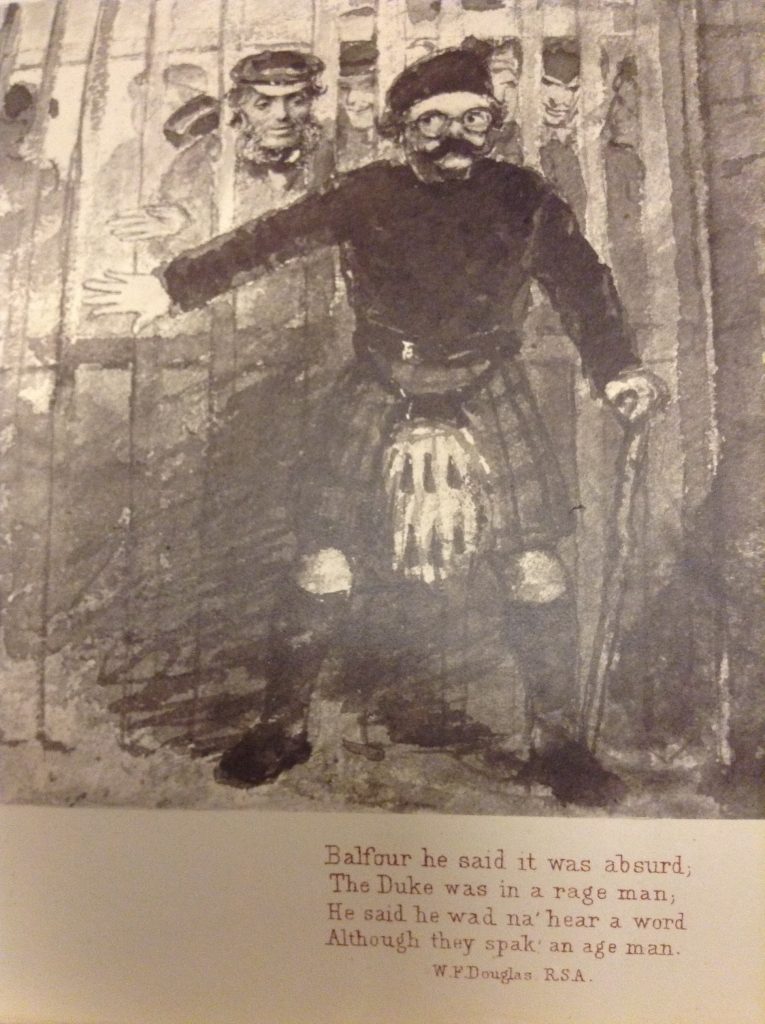 “Balfour he said it was absurd;
The Duke was in a rage, man;
He said he wadna hear a word,
Although they spak’ an age, man”
W.F. Douglas, R.S.A.
from Maclagan’s ‘Nugae Canorae Medicae’

BBC Scotland showed a documentary on the 14th March 2018  about land rights in Scotland that mentions the Battle of Glen Tilt, available here until 13th April 2018. 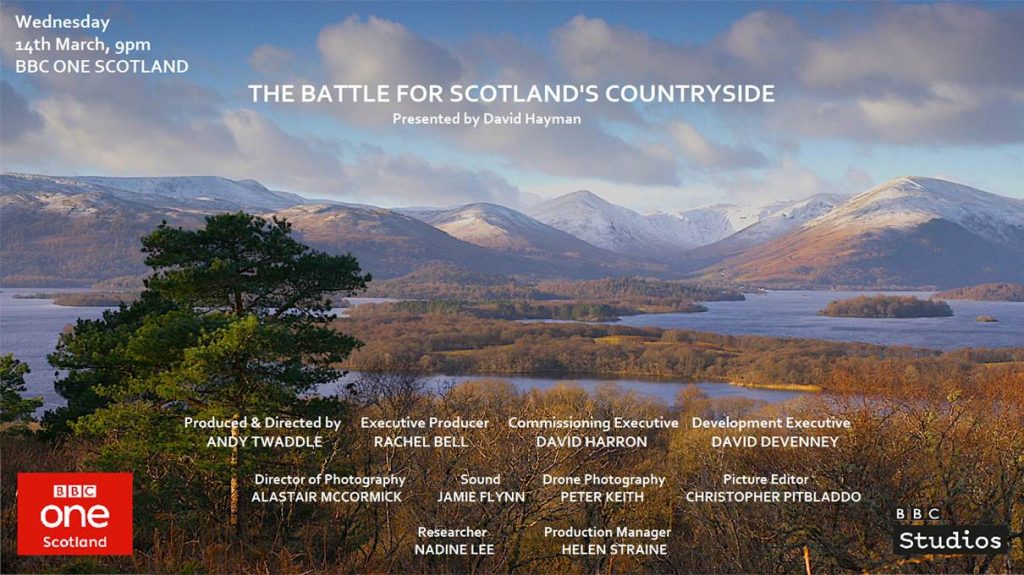 The Battle for Scotland’s Countryside