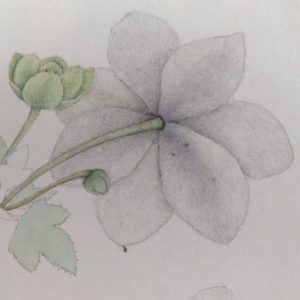 When the museum and library of the East India Company, following its inheritance by the India Office of the British government, was dispersed in 1879 its fragments were scattered between many institutions. These included the British Museum and the South Kensington Museum. With renamings and further institutional splittings, the fine and applied art collections, the zoological material, and the voluminous manuscript records of the EIC, are now to be found in the V & A, the BM, the Natural History Museum and the British Library. In 1879, and not without considerable acrimony, Kew received all the botanical material – in vast quantities. Among the economic botanical material were 36 tons of wood samples (largely subsequently destroyed), and from the library some 3359 botanical drawings.

Of the drawings 1791 were grouped under the cobbled-together title ‘Royle, Carey & Others’ – something of a misnomer, as pointed out in my last blog. With recent work at Kew, and subsequent follow-up at RBGE, it has emerged that approximately 1200 of these were made for Nathaniel Wallich, about 400 for John Forbes Royle at the Saharunpur Botanic Garden, and 100 for Francis Buchanan on the Bengal Survey. ‘Carey’ proves to be a red herring: none of the drawings has anything to do with the botanical-missionary the Rev William Carey, the name being a mistranscription for that of Thomas Casey, a temporary holder of the Calcutta Superintendent’s post in 1816 who probably had a hand in sending some of the drawings to the India Library. It is now clear that the drawings should really have been designated the ‘Wallich, Royle and Buchanan’ collection.

When Kew received this almost overwhelming influx of material they were generous in distributing what they considered ‘duplicate’ material to other institutions. In the 1890s RBGE received several such batches, including about 50 ‘Royle, Carey and Others’. In 1998 this was one of many distinct collections that I separated out from the 250,000 sheets of our Illustrations Collection; embarrassingly, it has taken me until now to work on them. Not that I was entirely idle over the intervening two decades, but I had decided to concentrate on elements of the collection that seemed to be most closely connected with RBGE – notably the collections of three notable Garden alumni, Alexander Gibson, Robert Wight and Hugh Cleghorn. My work always seems to result in the finding of hitherto unexpected connections, as shown last week with the Buchanan Bengal Survey drawings. This weekend it was time to turn attention to the 36 drawings annotated in Nathaniel Wallich’s untidy scrawl. I had always been vaguely aware of their significance and reproduced two in my first exhibition and related catalogue of the Edinburgh collection. These were of Aconitum ferox and Valeriana hardwickii, painted by Vishnupersaud in Nepal, and reproduced by Wallich in his sumptuously illustrated, elephant-folio Plantae Asiaticae Rariores, in which the Indian drawings were somewhat reconfigured by the Maltese lithographer Maxim Gauci. 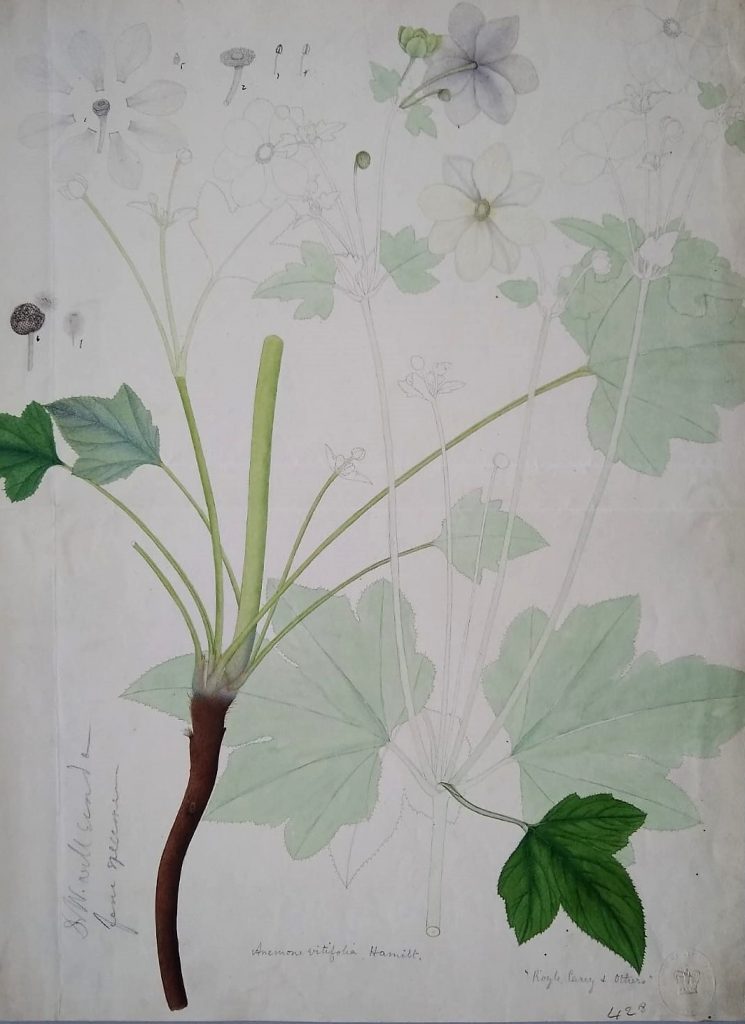 Anemone vitifolia. First collected and named by Francis Buchanan in 1802 during his stay in Kathmandu. He found the plant at Swaymbhu, and at Narainhetty – the grounds of the royal palace to which his party was almost entirely confined. Buchanan published none of his own Nepalese discoveries, and it fell to Augustin Pyramus de Candolle in Geneva in 1817 to describe the species (using Buchanan[-Hamilton]’s name), based on specimens in the herbarium of A.B. Lambert, which must have been collected by the Hon. Edward Gardner, British Resident at the Court of Nepal. The drawing, however, was almost certainly made by Vishnupersaud on Wallich’s own Nepalese sojourn almost 20 years after Buchanan’s.

In the introduction to this great work, Wallich explained that when he came to London on leave from Calcutta in 1828, he brought with him 1200 drawings, made by his artists both at the Calcutta Garden (following the tradition of his predecessors Roxburgh and Buchanan), and on a series of excursions to Nepal (1820/1), Singapore (1822), Awadh (1825) and Burma (1826/7). The drawings formed a very minor part of his baggage, which consisted of 20 tons of herbarium specimens packed in 30 barrels, 52 chests and 12 cases of living plants. Based in Frith Street, Soho, he spent the next four years curating and cataloguing the specimens and coordinating the production of his magnificent book. In this he was helped by a team of specialists working on particular families, which included Robert Graham, Regius Keeper of RBGE, who worked on the legumes. The specimens were identified and named (7683 species in this initial curation), sorted into 226,000 duplicates and distributed widely in 66 sets (of varying degrees of completeness). The top set was kept in London, presented by the East India Company to the Linnean Society, who presented it in turn to Kew in 1912, where it remains in its handsome, original mahogany cabinets. Wallich’s own lithographed ‘Numerical List’ (known as the ‘Wallich Catalogue’) of the herbarium, which contains material from localities stretching from Kumaon to Singapore, contains details of the collections, each species having a number, with supplementary numbers or letters in cases where species were represented by more than one collection.

What nobody seems previously to have realised is that the Wallich drawings are – hardly surprisingly – intimately connected with his herbarium specimens. The drawings bear no collecting details, only a plant name, but it has proved possible to link them not only with the 300 that were reproduced in Plantae Asiaticae Rariores but, in many cases, with specimens in the Wallich Herbarium. Some of the drawings will therefore prove to be part of the original material (‘types’) of new species based on the specimens. 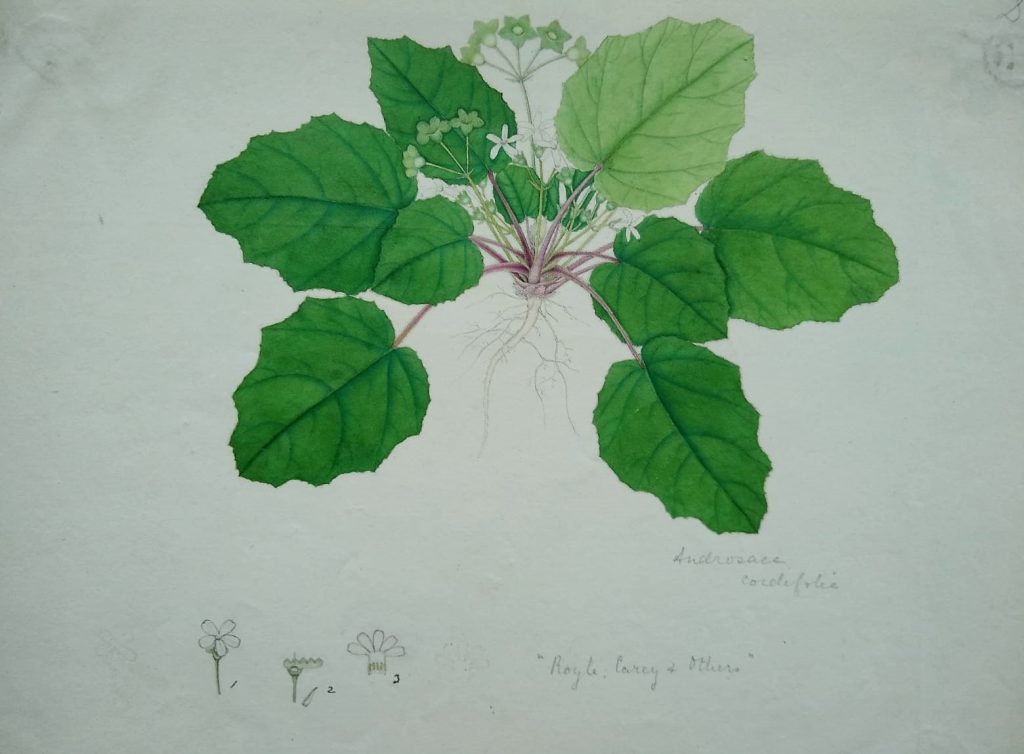 Androsace cordifolia. This plant was first described by Wallich in 1820 in the Calcutta-published Asiatick Researches in his first paper to describe some of the Nepalese material sent to him by Gardner. This was a pioneering publication in many ways, not least his use of Indian etchers to reproduce his artists’ work (later given up in favour of equally pioneering Indian lithography). No specimens of Gardner’s or Wallich’s seem to have been preserved, and this drawing, almost certainly made in Nepal in 1821, was clearly lost sight of, so that when Joseph Hooker wrote his account of Primulaceae for the Flora of British India in 1882 it was treated as an ‘undeterminable species’. When Sir George Watt unknowingly redescribed the plant in its correct genus in 1882, based on specimens collected in Bhutan by William Griffith, he failed to use Wallich’s earlier epithet and named it Primula filipes, by which it is currently known.

The result for the 36 drawings that have come to rest in Edinburgh has been a revelation. Two, as already realised, were Nepalese plants published in Plantae Asiaticae Rariores, but from details in the Wallich Catalogue a further 19 can be shown to have been painted in Nepal in 1820/1, some by Vishnupersaud, a larger number by Gorachand none of whose works I had realised were represented in the Edinburgh collection. Their authorship is known because Wallich was scrupulous in giving the name of the artist as well as the lithographer on the published drawings. A collection that initially seemed to have little relevance to RBGE has, once again, proved to be the exact opposite – given that the Flora of Nepal is one of our major current projects, but with no previous inkling that in our archives were 21 exquisite drawings made in Nepal almost 200 years ago. 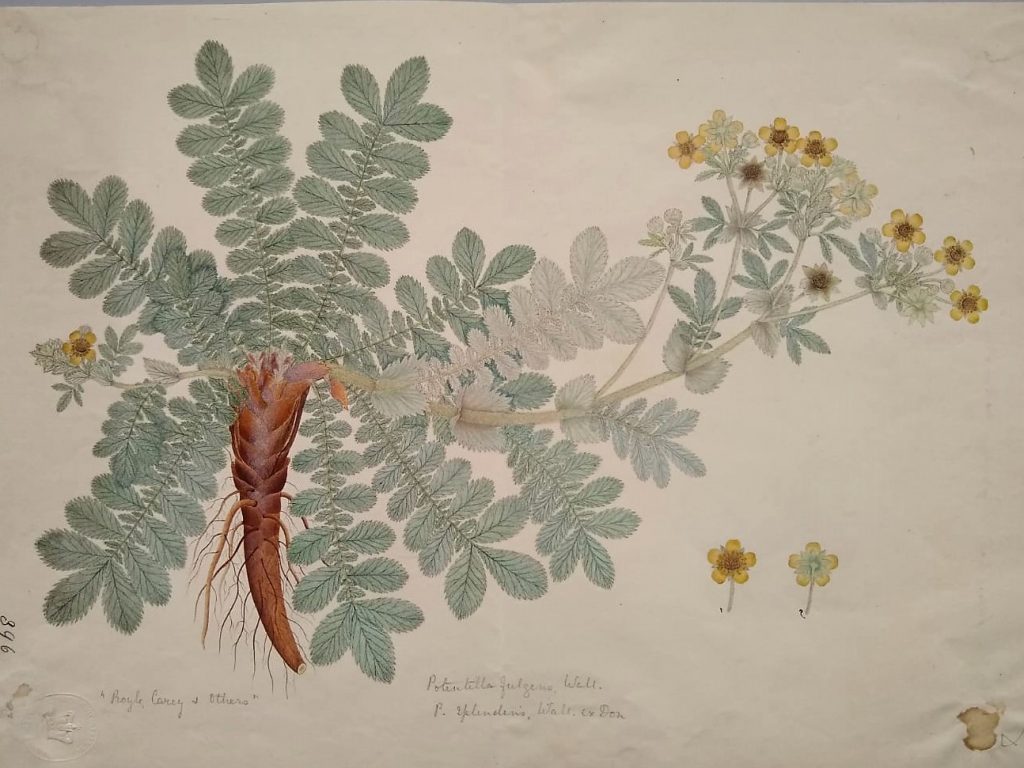 Potentilla fulgens. Probably the work of Vishnupersaud, this drawing is one of the finest of the Wallich ones at RBGE, beautifully depicting the fine hairs that cover the leaves – rather as in the British silverweed. Wallich initially called it Potentilla splendens (published by David Don in his 1825 Prodromus), but this had been used earlier for a different plant, so William Hooker took up another of Wallich’s equally appropriate suggested epithets (‘shining’) and renamed it P. fulgens. It had, in fact, been described four years earlier by L.C. Treviranus who must have realised that P. splendens was what nomenclaturists snappily call an ‘illegitimate later homonym’ so dubbed it Potentilla lineata, the name that stands. This was based on material cultivated in the botanic garden of Bratislava, which must have been sent to him by Wallich. In the EIC herbarium were two Nepalese collections, from one of which this drawing must have been made. Both must have been brought back to Kathmandu (to which, like Buchanan, Wallich was confined) by Nepalese collectors – one from anonymous ‘montes altissimae’, the other from the pilgrimage site of Gossain Than.