Alfred Wallace and the Tricolored Jewel 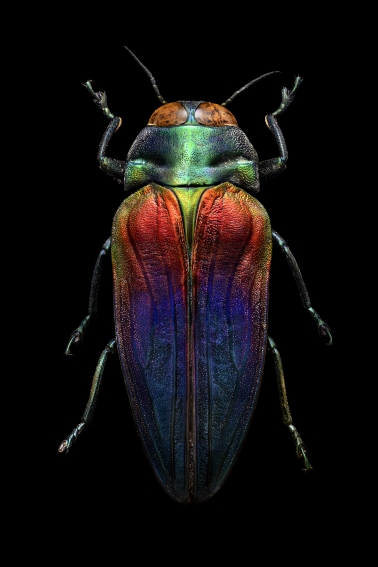 When Charles Darwin and Alfred Russel Wallace presented their joint paper ‘on the Tendency of Species to form Varieties; and on the Perpetuation of Varieties and Species by Natural Means of Selection’ to the Linnaean Society in London on 1 July 1858 neither author of the theory of evolution was present. Darwin was making funeral arrangements for his son Charles who died of scarlet fever three days before. Wallace was in the Mollucas collecting beetles.

The poster-image for the Microsculpture exhibition by Levon Biss, opening next week in Inverleith House, is from a specimen of the tri-colored jewel beetle (Belionata sumptuosa) collected by Wallace during his Mollucan expedition, from rainforest on the island of Seram. Wallace traversed the island from North to South, crossing over the precipitous Kobipoto and Binaiya ridges and he found the going tough, wearing out two pairs of stout walking shoes on the journey.

I followed in Wallace’s footsteps, crossing Seram with a local guide, Saul, and a copy of Wallace’s Malay Archipelago in 1986 on a reconnaissance expedition for Operation Raleigh. It is quite possible that no other European had taken this route in the 138 years between Wallace’s expedition and my own but very little appeared to have changed in the meantime. The interior of the island was still inhabited by hunter-gatherers armed with bows and arrows and the rainforest, with its beetles and endemic salmon-crested cockatoo, stretched from coast to tree-line, making it the perfect place to study altitudinal zonation.

Today looking at satellite images of Seram on Google Earth there are still no roads through the protected central part of the island, the Manusela National Park. However, either side of the National Park logging roads can be seen stretching far into the interior and the lowland diptocarp forest outside the Park has been felled for the valuable meranti timber. Following timber extraction farming settlements have sprung up in the wake of the felling, sponsored by the Indonesian government’s transmigration scheme. There are also extensive areas of alang-alang (Imperata cylindrical) grasses.

Adult tri-colored jewel beetle eat leaves and fruits of trees, the grubs bore into wood. They also eat pollen and may help pollinate some flowers. The endangered salmon crested cockatoos, found nowhere else in the world, eat tree fruits and nuts and help disperse seeds. They also feed on insects like the jewel beetle. Trees, beetles and cockatoos are part of the inter-dependent system that supports the complex structure of the tropical rainforest. Remove part of the ecosystem and the survival of the whole is threatened.

The conservation status of the tri-colored jewel beetle is unknown but it is safe to say that logging of lowland forest on Seram and decline in salmon-crested cockatoos through the illegal wild-bird trade is probably putting the population under pressure. By including this iconic species of jewel beetle in the Microsculpture exhibition we are able to highlight not only one of the most influential naturalists of all time but also the vital work of organisations like RBGE in studying and supporting the conservation of the rainforests of SE Asia.