This was followed by what was to have been a quick investigation of DNA fragmentation in the two Polytrichum accessions (one with high molecular weight DNA, IK31, and one more typical of herbarium material, IK53, with mostly degraded DNA), to devise the fragmentation protocol we would then apply across the rest of the samples in the project.

Naturally nothing is quite that simple. Firstly, possibly as a result of initially quantifying the stock DNA on a Qubit, but quantifying the normalised DNA on a DeNovix (albeit using the same Qubit dsDNA HS kit for both), the normalised DNA was far less concentrated than we expected based on the stock concentrations. And yes, we were using lo-bind tubes…

The second problem is a little more complex to describe. We were testing different numbers of sonication cycles (30 sec on, 90 sec off) in a Diagenode Bioruptor. Six 53 µl aliquots were made from the normalised DNA for both accessions, and the tubes of DNA from each accession were put in the sonicator for up to 12 cycles. After every second cycle, one tube was removed and replaced with a blank tube (containing 53 µl of 0.1 TE), i.e. for each accession, we ended up with aliquots that had been sonicated for 2, 4, 6, 8, 10 and 12 cycles.

The DNA was then run on an Agilent Genomic DNA ScreenTape… 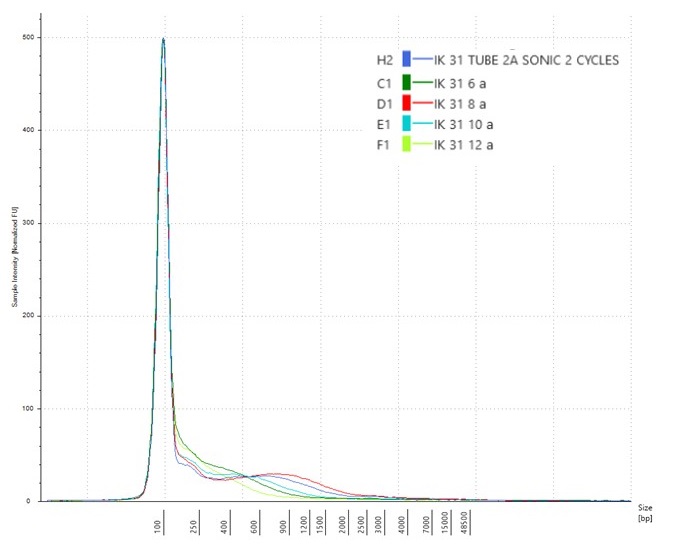 Tapestation image of DNA extraction IK31, with 2-12 cycles of sonication

… and on a Bioanalyser chip with a High Sensitivity DNA assay….

Bioanalyser image of DNA extraction IK31, with 2-12 cycles of sonication

The picture for IK53 is a little more straightforward:

Here, the Bioanalyser traces show that the sonicated DNA contains less of the higher-molecular weight DNA than was present in the original aliquot (represented by the red line above). However, there’s not really a clear pattern of reducing fragment size after 2, 4, 6, 8, 10 or 12 cycles of sonication.

So we repeated the experiment for IK31, taking very great care to match the numbers on the tubes with the number of sonication cycles. And this time, the tube that had undergone 6 cycles of sonication (the green line on the chart below) was the one that contained the highest molecular weight DNA.

So the NEXT thing we tried was taking three (supposedly) identical aliquots of 53 µl of the normalised IK31 DNA, and putting them in the sonicator, alternating with three blank tubes that contained 53 µl of 0.1 TE. We then removed 1 µl from each of the DNA aliquots after every second sonication cycle (up to 8 sonication cycles), to run on a Bioanalyser High Sensitivity chip.

(As there are only 11 wells on these chips, the tube c 8 cycle sample was not run). 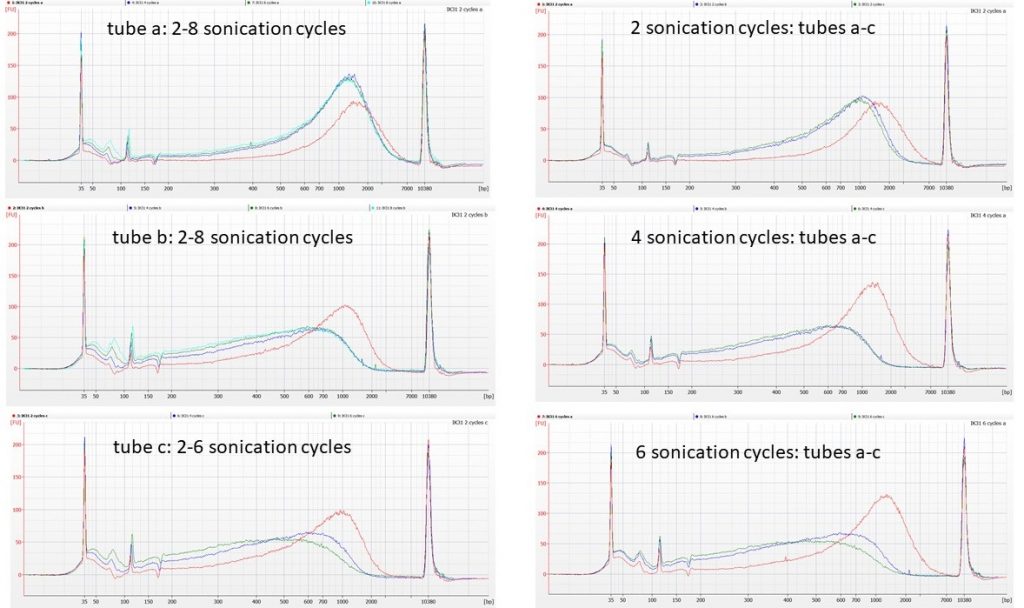 We’ve seen similar issues before, with DNA that is difficult to shear, particularly in plants where polysaccharides may be co-precipitating in the extractions alongside the DNA. What seems harder to explain here is that these different patterns are between aliquots from the same tube of normalised DNA.

Our next step will be to clean some of the IK31 DNA extraction and repeat the sonication experiment, to see if the results become more consistent between replicates.